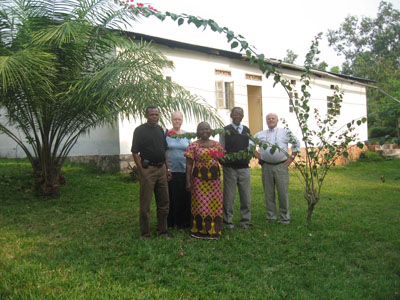 Before breakfast, Bernt and I went for a morning walk in the beautiful surroundings of Luozi. We said hello to two grazing oxes tethered in the church area. The oxes were of some African breed with enourmous sets of horns. They are used for farm work around Luozi, and in that way they generate money to the church, which is used for the education of evangelists. On our way we also met a dog that lover-of-animals-Bernt tried to make contact with, but as Bernt still don´t know many words in French or Kikongo the dog cold-sholdered him and continued on it´s way. Along the way we also found a 4 wheel drive Ford tractor in poor condition. However, it seemed as if it had hardly been in use before it was abandoned, and maybe it could be put in shape again. One of Congo´s problems is that there are many tractors and other machines that are unusable simply because there are no spare parts. Hardly any service organizations have established themselves in Congo over the years, with a few exceptions. The state recently imported quite a lot of John Deere tractors. The tractors are leased to farmers, who pay by the size of their fields. So, if you want to send a tractor to Congo, it must be a John Deere or a Massey Ferguson so that there are spare parts available for the vehicle.

At 10 am, we came to the Mawanda Church. The service had probably begun around 9 am. As usual, we were seated in the front on plastic chairs. The head of the church, Edi Diafuanakana, introduced us and I got the opportunity to say a few words about MSG. The congregation was celebrating the church´s 50 years of independence. Pastor Edi Diangitukulu spoke about the years between 1881 and 1961, he talked a lot about Sweden and the missionaries that had given their lives for Congo. Because of this, the service became particularly interesting for us Swedes. Pastor Nanitelamio spoke about the period of independence, that is, the last 50 years. The pastor of the congregation, Nzuzi Nsemi, conducted the service. The district head of the church Luviengila talked about the challenges of today´s church and what features of the church that we want to hand over to our children. He said that the Congolese must shoulder the responsibility to form a church that stands on its own feet, a church that attracts people. Then the church can become a force to be reckoned with in the future society of Congo.

The Nyambudis treated us to Sunday dinner. Besides me and Bernt, Gunnel Jönsson and Yapeco were also invited. On the menu, there was chicken, rice and manioc, and for desert we had fruit salad made of papaya, oranges, lemons and bananas. All the fruits except the bananas came from their own garden. They do have a banana tree, but on this occasion it didn´t have any fruits. After dinner, we took a walk in the large garden which has a substantial amount of trees and plants. We picked oranges and lemons, passion fruit and a number of other exotic fruits that I don´t know by name. In the garden, there are 11 beehives, a pigsty and a hen house, but at the moment there are no animals in them.

This afternoon, we also had a meeting with the head of the church, Edi Diafuanakana, and we put forward some ideas and viewpoints. We also talked about the future fruit factory in Luozi, and we booked a new meeting with him in Kinshasa on Wednesday afternoon.