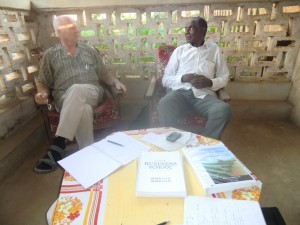 Today we visited our bank in Congo, Ecobank. We got an hour with the CEO here in Matadi, Steve Emongo. We are going to get our bank account linked to the internet, which means that we can check our account from Sweden. We introduced the course material from FBS to him and presented the issue of whether Ecobank would be able to support our entrepreneurs with loans in the future. We have learned from experience that the local banks should take care of the money issue. We got a pretty positive response. If Ecobank agree to our proposal, we will certainly have to come back with more specific information. We talked some about solar lights and also mentioned the ECO-house which is self-supporting concerning energy.

Today we were supposed to meet four of the earlier entrepreneurs. One of them came when we were at the bank and had to go before we were back. The others didn’t come at all. These four entrepreneurs have not repaid their loans, and we wanted to know a little about their respective situation. But not everything goes as planned.

At half past four, a dear old friend, Samuel Nkailu, came to see us. He is the reason and origin of MSG’s activities in Congo. It is now eleven years since he met my sister Inga-Maj in Mukimbungu and astonished her by adressing her in Swedish. When they realized that they had a mutual acquaintance – that is me – Inga-Maj arranged the contact of the two of us, and I started to correspond with Samuel. In 2007, Samuel came to Sweden and on August 24 that year we formed the Matadi Support Group. The Youth House in Matadis was built and opened on October 9 in 2010. Then, we continued with a training program for entrepreneurs. So far, we have worked with about 100 entrepreneurs and would-be entrepreneurs.

Samuel told us that he has been ill for three months. One of his legs has had chronic wounds. But otherwise, he was like before, spirited and alert. We discussed the Youth House and Samuel admitted that the activity “is a little slow”. There are so many different things that vie for the attention of young people today. To the Youth House, they have invited musical leaders and choirs from different churches. The purpose is to activate the young in singing and playing instruments and to encourage the talents in music and song. Samuel says that the activities could have good use of a synthesizer and other instruments. Recently, MSG received a donation and the giver wanted the money to go to the Youth House. The timing couldn’t be better.

We also have an old promise to fulfill. At the inauguration, we promised to help with a ceiling in the great hall of the Youth House. We have now asked Samuel to contact tradesmen and get a price estimate while we are here. Some holes in the roof have been repaired and now is a good time to get the ceiling in place.

We talked about the new course that will begin tomorrow at the Youth House. Samuel will be there very early in the morning. There are plenty of chairs and tables. At 10 a.m., we will start to rig up. On television, they have announced that the power will be off tomorrow. Luckily, we can borrow Yapecos generator. Now, we just hope that the projector, fans, and other gadgets will work so we can deliver a decent training under favorable circumstances. It can get hot under the metal roof in the early afternoon.

Our postman tasks have been completed now that Samuel got his letter from Alice Sandblom. Previously, we have delivered toys and a letter from Ulla Lind till Nsimba on Nzo Binati, a package from Curt Olofson also to Nsimba, and Emy in Kimpese have received calendars from Febe Karlsson, letters from Ingrid Norberg and solar lights from Rimforsa. The solar lights are meant to for Mukimbungu.

1 thought on “A dear old friend”