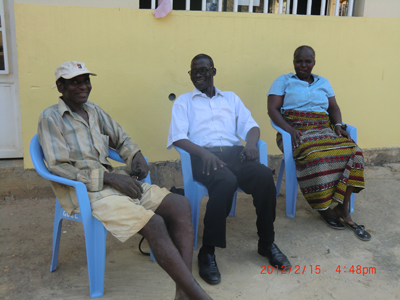 Samuel takes a break together with Muditu and Julienne

The day began as every other day with the usual scoop shower and shave, but instead of oatmeal porridge we have been served oatmeal gruel since we got to Lisanga. On our arrival, we specifically asked for porridge for breakfast, but so far we haven´t seen any. Either they are short of oatmeal, or porridge is an unknown phenomenon to them. We haven´t made any further inquiries as it isn´t a problem. We mix the gruel with sliced banana and powdered milk diluted in water. It is an excellent breakfast that make our stomachs feel fine. We also fill up with plenty of water in the system, the bodily functions work much better when they have access to an abundant water supply. Therefore, we fill up with each meal.

At 9.00 am we came to the Youth House to review the work of the Demba group, which is one part of the October 10 group. Demba is the chairman of the group. He repays his instalments in a model way, he has been ahead with his payments all the time. Unfortunately, only Demba showed up for the meeting. We knew that Philippe wouldn´t come, because his mother in law had died, and the funeral would take place today. And Marie France had been transferred to Kinshasa, and we had already met her there. Pierre was still in Matadi, but he couldn´t take time off work at a flour factory. We booked a new meeting to 4.30 in the afternoon with both Demba and Pierre.

The other group was scheduled to come to the Youth House at 1.00 pm. But our dinner got delayed, and wasn´t served until 1. The staff of the restaurant had been on a meeting, and consequently, the usual dinner time had been shifted. At 1.30 pm Bernt and I arrived to the Youth House. Axel Biongo and Muditu had come before us, and Muditu was a bit annoyed that we weren´t on time. His irritation was justified. The rest of the group arrived at 2 and 3 pm, and at 3 pm we could open the meeting. We went through the repayments of each member´s loan, and we noted that some of them are good payers, while others are having difficulties. We spent some time on explaining clearly what will happen to the group if members don´t repay their loans. Everyone seemed to be aware of the consequences of unpaid instalments. Jean Pierre said he thinks our teaching is using the stick more than the carrot, and we had a discussion about the strengths and the weaknesses of different perspectives. Among other things, we talked about the benefits of long term planning as well as the benefits of being spontaneous and expressing joy. We agreed upon that there needs to be a balance, and using the stick and the carrot evenly is the best way to work with entrepreneurship. All in all, we had a good discussion.

In the afternoon, Demba arrived on time for the rescheduled meeting and waited patiently for Pierre. That´s the way it usually is in Congo, you have time and you aren´t that influenced by the clock. Anyhow, we had a good talk with Demba, he feels responsible for the group and is a reliable person. At 6.15 pm we gave up waiting and said goodbye with an ”au revoir”. Walking back to Lisanga, we met Pierre on the road and he joined us to our lodgings. What should have been finished by 3 pm, was finally ended by 7.30. We had a slow day, with other words. Preparations for tomorrow got compressed and I ran the risk of having to to night work.

Samuel Nkailu, our good friend, is faithful to the Youth House. This morning, he had already been there for an hour when we came. While we were meeting with the groups, Samuel moved stones outside with a wheelbarrow. He walked barefoot on the stones, and he must have very thick soles since he was working the hardest when the temperature was the hottest. In the sun, it must have been 40°C. I felt feeble just watching him.