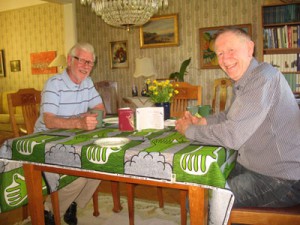 Tuesday night Bernt calls me on the phone to let me know there’s a problem: our visas are still at the Congolese Embassy in Stockholm, and the Embassy are going to send them by surface mail on Wednesday, which means they will not arrive until Friday. And our flight leaves at 06.55 am on Friday. Excess baggage can be negotiable, but to start off without a visa is not a good idea. To engage a courier to bring us our visas would cost SEK 2300:-. It was out of the question. Suddenly I came to think of cousin David who works and lives in Stockholm, but grew up outside Gothenburg. Sure enough, on Thursday he was planning to go to a town nearby to fetch his motorcycle. He promised to pick up our passports at the Congolese Embassy on Wednesday around 7 pm. And we agreed to meet up with him on Thursday afternoon.

Wednesday night we changed the location of the delivery of  the passports to fit the route of Curt and Gunnel Olofsson from Jönköping who were coming to Töve on Sunday afternoon. They were going to bring Gunnels French translations as well as calenders, greetings and money that we will deliver to various recipients in Congo when we get there. Curt promised to pick up the passports on the way, and I was so glad that it worked out without any extra excursions on my part as my hands were pretty full anyway. At 5.30 pm on Thursday Curt and Gunnel met our courier and the passports and visas got one wee bit closer to the Congo travellers.

With ten hours to spare before our departure to Landvetter Airport, Curt handed over the passports to me. After all, we´d had enough time, and no one had made any uncalled-for trips. When I told David that I had the passports in my hand, we were both pleased about this courier comission being both environmental friendly and smooth. We hadn´t had any unplanned turnouts or additional costs, and the Congolese Embassy had even gained a small profit from the prepaid postage we had already sent them. This small contribution might help with their budget. They have been evicted from the Embassy premises for neglect of payment of the rent.  Our visa mishap involved many elements and turns – all of them are not included above – but they all fell into place in a marvellous way. I think I can see a higher manager in this; the manager with the bigger picture. To trust in such a manager removes many worries.

Bernt and I are now flying somewhere over the Sahara desert and there will be a stopover in Kamerun at the Yaounde Nsimalen International Airport in about an hour. Then, the plane will continue to Kinshasa, where we will land at 7.20 pm. Judging from the e-mails we have received, there will be several friends and co-workers meeting us at the N´djili Airport. The plane is an Airbus with nearly 300 travellers. About half of us are white, the other half is black. The service on the plane is good, first we had refreshments and then dinner and coffee. We intend to stay for three weeks in Congo this time. Our itinerary, including the various planned activities, is published on the website under ”About us”.

1 thought on “A ten hour margin is enough”