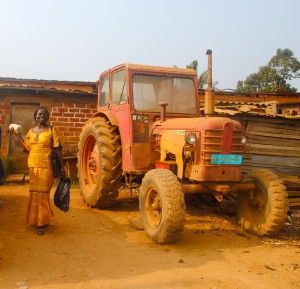 Last Sunday it was time for a roadtrip to Nsanda, a village about 45 minutes from Matadi. We spent the day there and came back around half past four. It was a lovely day and it was wonderful to get away from the city for a little while and see the countryside of Congo. In Nsanda we attended a long cermon. They didn´t have a real church and the cermon was proceeded outside in the nature under a roof made of straws. I thought it was fabulous to spend the day outside in the sun and listen to the fantastic African choirs and it became even better because Julienne were there to make a fantastic job by translate the four hour long cermon for me. For me it was also nice to be able with Julienne to have a real long conversation in Swedish, the first real one for three weeks. Because they now are buldning a church in Nsanda and today was the day to ….the first …. It meant that it was some extra procedures then usual.

In school it is now lesson number six and seven that´s on the schedule. Lesson number six I’m teaching pronouns, clothes and adjectives and number seven it is some more verbs, weather and grammar. It feels like I’m really getting the hang of it now this thing with the teaching. Now when the level is a little bit higher then before it´s more fun to teach and I also think that it´s more beneficial for more students. But for the future englishteacher here in Matadi I would really suggest to divide the students after their knowledge in English. You may think it´s unfair that way but I think that at the end of the day that is the best way to make as many people as possible learn as much English and develop as much as possible. That will make the waitingtime shorter for the ones that´s a little bit faster and give them a chance to move to a more advanced level and it will give the ones who needs it more time and space to really learn the basics.