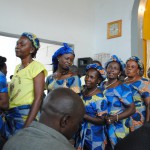 At ten to six the sound from awakening hens wakes me up, I hope I get used to their sound soon. Later in the morning me and Yapeco ate breakfast with porridge, the, peanuts and bread. I followed Yapecos son Stig to buy the bread in the morning. On the walk I got some beautiful pictures but the woman that was selling the bread thought I was a strange Moundele that wanted to take a picture of someone who “only is selling bread”.

Just before nine we arrived to the Baobaochurch. I got to presentate myself in bad French to the community and when I said that I liked to sing and play they invited me up to the stage. Unfortunely I don´t got the talent to play without chord or sheets so instead I sang Amazing grace accapella. I sang both in english and Swedish and a girl from the community started to sing along with me in harmony so it turned out pretty good!

At half past ten we went to the second church, the baptistchurch. When we got there it was crowded with people. It was very beautiful with all the colorful clothes! The ceremony didn´t end until four o´clock but it neverless felt boring because the mainpart existed of music and singing from a number of choirs. They were incredibly talented and it sounded very good and it was also a lot of dance and joy! I got to stand up in the front of this church to and say hello to the community but the mainfocus wasn´t on me this time but on the new priest that was introduced today.

After the ceremony I got to met Julienne for the first time, she´s the one that usually do the translating for Matadi support group so I got to speak Swedish today to!
The dinner was waiting for us today again when we got back and today chicken and rise was served, my favourite plate! At the evening I drink tea with Signe and Stig, Yapeco and Augustine’s children and then I prepare for the English teaching I hopefully will start with this week. Tomorrow we are going to plan the whole thing with the priest, I hope it will go well and that I can help them a little english even though I neither a educated teacher or speak French. But I think and hope that with the good will from the Congoleses it all will work out just fine.