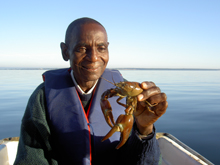 Samuel in crayfishing on the lake Vättern

When I came to Sweden in 1961, I had a family with two children. Now my family consists of six daughters, a son and fourteen grandchildren. Congo is not a particularly pleasant country. War with its neighbors to the east have made the people poorer and caused major economic problems.

I am responsible for all youth activities in Baskongo. The work is appreciated by the people, first and foremost by the Church but also of the whole country. We are responsible for the Scout Association and other youth movements.

I am employed by the state. To be a servant of the state is no life. The government pays no real wages without giving a symbolic price of 20 dollars a month. Half of this money goes to rent. Then of course we need also to buy food, water and kerosene. We have no electricity and producing and working in the fields to get food to survive. We grow peanuts, corn, cassava and some bananas. I can imagine that you feel it is poor and sounds boring. But we are happy and try to make it look like we have everything you have in Sweden. We can handle ourselves.

2003, I met with Yngve’s sister Inga-May in Mukimbungu. It was the first time we met. I surprised them by welcoming them in Swedish. “How can you Swedish?” They asked immediately. I started telling about my life along with the other students in the SVF. Back home in Sweden showed photo on me for the family. Yngve said: “That is of course Samuel Nkailu. We went to the same class in Jönköping. I must write to him. “And he did:” If you are Nkailu can you tell us what you do to the jeep. Please tell that you really live. What are you doing? “When I got the letter, I was very happy that night. I felt that a new life began. I wrote back the night before my 68th birthday. It became a full six pages in French. The Swede had been forgotten.

With the help of the rolling object jeep, I started up youth in the area when I came back to Congo 1963. After twelve years prohibited the State youth in the church. We were youth leaders in the church were hand picked to become youth leaders in the state. I became youth leaders in the party and all young people and myself moved into the lot. I could help them because I knew their situation. This continued until 1993 when the beginning of the democratic process was announced. During the twelve years I worked in the church I was involved not only in setting up groups, but also with the development center for farms and livestock. We had hoped that it could become a source of income. When I was out of the political work, nobody could take care of the cows and crops and the project failed. None of it remains today.

I am now responsible for the youth of the entire Baskongo. In all groups of young people, we have different projects. Why do we project? Young people have many problems: poverty, no education, unemployment and health problems. We in the church and the children’s parents all have a common responsibility for these young people. Of course, also State responsibility. Everyone should help each other. Since I am responsible for youth work, it is for me to do something for young people. It is not easy. However, I am not alone in this work. I have colleagues in the inner area of the country. I called together the supervisors on a regular basis and try to get them to understand what we can and should do for young people.

Our country is five times as large as Sweden. The population consists of 60 million people. This is an estimate. Many live in villages on the outskirts of the country where you can not come.

I am responsible for Baskongo with three million inhabitants. Shopping is Matadi. 59% of these residents are children and adolescents. We are responsible for 1.35 million young people with problems. You can imagine the magnitude of the responsibility. There are not many of them going to school. According to 2001 statistics, 23% of young people neither read nor write. Of these, 23% girls. They have no future. They will find it very difficult to find jobs because there is not enough business. There are no social assistance. Those who are of retirement age can not get any pension. The state has no money to pay with. I would have retired five years ago. I have to continue working. My site should be taken over by a young man, but I must remain as a cause of unemployment.

Healthcare. Perhaps it is the equivalent of a sick Alvedon reception. Many die. In cities and larger communities are health centers. But you have to pay money to get treatment. If you are poor you can not get to talk to a medic. Many see death approaching because they did not have any money. The most difficult is it to AIDS. These issues put an end to adolescence. Many are fleeing from Eastern Congo, and bring with them diseases spread in our region. Matadi is number two in the case of AIDS. Difficult it is in Katanga. Matadi is a port city. These are people who have diseases. They will meet and nicely dressed young girls without money who gives himself to these men. I want to give some idea of what we do for young people.

UN. We work with the UN opportunities available in order to reach out to people. I’m with the group fighting against AIDS. We are trying to get churches to keep up to disseminate information about AIDS. For me and for this group are the major problems to occupy our thoughts. We are trying to organize a youth house in Matadi. We have built half. It is slow because we are a poor country. As a youth house, we try every month to give a small sum of money. It is not enough. We cultivate the fields and sell the crops and get money for further construction. Our project is moving forward a little at a time. I could go on to talk to in the morning on our project and our plans. Jeep used during the first twelve years and came to great use. With our roads had not been able to keep the car until today.