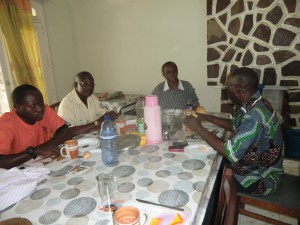 We started with breakfast at the nearby Nzo Binati. Michel arranged it all. To our delight, Church Director Edi Diafuanakana came to say hello when we were in the dining room. He had a meeting with his closest employees at Nzo Binati . We talked for a little while with him and we decided to have a proper meeting tomorrow. We would like to introduce some new ideas for the future and we feel that it is important that he is well informed.

We proceeded with going through the agricultural project Nsanda. Julienne gave a status report and we prepared for the meeting in the afternoon with an advisor to Agriculture Minister Emmanuel Libendele Lobuna.

The security at the government headquarters was extensive. We had to pass five control station, of which two had body scans. It took one hour to thoroughly verify that we absolutely do not pose a security risk for the country. At the end we received our passports, identity cards and mobile phones.

When you enter the government headquarters, the most conspicuous item is the mausoleum of the older Kabila. It is a magnificent monument in the center of the administrative center. In front of the mausoleum Kabila stands statue, holding up his finger to remind his countrymen to keep order in the nation.

We were well received by the Minister’s employee. With him, we went through our various projects and he got our information binder. Mainly, we raised the issue of family farms and ecological houses with solar and biogas plants. After the thorough review of these two projects, we asked for support from the government to the projects. We didn’t get any promises but we still felt that it was a good start with contacts at that level. Our agenda at this time is to build relationships that eventually may be able to produce results. We will provide him with more detailed calculations and we will keep him informed about our work.