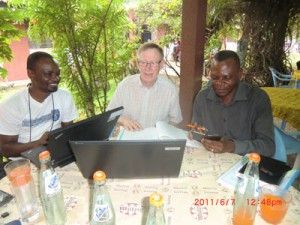 After the usual getting up it´s time to toddle off to the shower. We feel that the shower is colder here compared to in other places in Congo. Bernt is guessing that the water might be originating from the Arctic Ocean. But I don´t think he is right. We ought to be about 1.000 kilometers from the Arctic, and the water pipes simply aren´t that long. It is very climate friendly, and cost-effective for the hotel to have cold water in the shower. The amount of time you can endure a really cold shower is generally brief. For the individual, the cold shower has it´s good points too: it is indeed both awakening and refreshing.

After breakfast at the catholic oasis, we went straight to the Swedish Embassy. We were very well received, but the atmosphere was harsh to begin with. The cause of the discord was a case of a visa application in March and April. The sharpened Schengen Agreement took effect during spring 2011, and it makes heavy demands on Congolese citizens. A person who applies for a visa to the Schengen area must have employment with a stable income and be able to prove ownership to a bank account of several thousands. The reason for the sharpened regulations is said to be the many defections. We got the information that 80% of all visa applications had been refused during the last months.

Both we and the embassy staff were frank and open in describing the events that had led up to our disagreements. We cleared the air and I and Bernt shook hands with the responsible official and apologized for our indignant responses to the handling of the visa application in question. Now, we will do what the Swedish head of State tried to do: we will turn the page and move on. We got the opportunity to use our Power Point presentation and talk about our activities in Congo. During the presentation, we realized how important the embassy could be for us. They have a wide network and know many people that could be of help for us. First of all, we need financiers and advisors. We are looking forward to a closer cooperation with the embassy. Our visit to the embassy ended in mutual understanding.

Our next item on the program was a budget meeting with Yapeco. We looked into the documentation of his business and drew up a budget. He will get a loan from MSG in order to strengthen his business and make it more profitable. After the meeting, we had a delicious dinner. And back at the hotel, we discovered that there was electricity in the wires. And better still; there were no more power failures during the day. Wonderful!