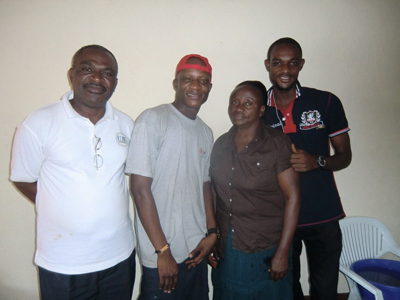 The TV team with one camera man missing

At 3 in the night, we woke up and were ready to go, but we didn’t get going until 4 a.m. After 10 km, one of the cars started to malfunction. It was the same car that had had an engine failure on Friday. It was deemed that it would not work all the way to Brazzaville. We turned back and left the car in Madingou. We got two more passengers in our car and were now eight people, it was a bit crowded but it worked. Three of the cars belongs to José and one is Joseph’s. The one that we left behind was José’s.

In the town of Lutete we made our first stop for breakfast. Joseph purchased baguettes, cheese and bananas and we had a quick breakfast in the car. Our friends the politicians were supposed to be in Brazzaville at 10 o’clock for a parliamentary vote. We didn’t manage to get to Brazzaville on time, but they went straight to Parliament anyway. Let’s hope Congolese time applied to the voting. Then they would be able to vote.

When we shortly before noon returned to the Saphir hotel we had covered about 1200 km since last Wednesday, and 1700 km if we take into account the entire week. Most part of the route have been spent on muddy gravel roads. By now, we have a pretty good idea of what it is like to travel by car in Congo during the rainy season. An invaluable equipment in a car is the AC. Without it, the heat becomes oppressive and the trip becomes an endurance test. But even with an AC, trips by car are not a great pleasure. It can be a shaking experience to travel in this way. We could have gone by airplane to Dolisie, but for various reasons we chose not to.

It was wonderful to get to the hotel with all the comfort that it offers. First, we called our wives via Skype, the first contact since last Wednesday. After a shower and a change of clean clothes, life was very comfortable. Then Bernt and I ordered and ate spaghetti and meat sauce. We were quite hungry, and the meal was welcome. Later in the evening the hotel staff came with a small basket of fruit and sweets, great service.

Unfortunately, we were unable to go through with the two days of entrepreneurial training with course participants from Osdo. We are very sorry that it didn’t happen. Myriam had prepared the thirty participants for our part. We will try to compensate them in some way. As well as possible, Myriam has tried to explain the situation to them. To stick to the planned course of action is not the strongest trait among our friends the Congolese. In addition, there is an abundance of contingencies and intricacies in the Congolese daily life. The Congolese look upon these incidents with great calm. There is always time and most things can be done later on. But we have a return ticket to Sweden that cannot be rescheduled. At 10.05 p.m. on Monday we are leaving from Ndjili, Kinshasa.