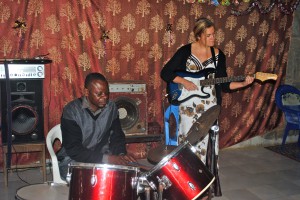 This sundaymorning we missed out on the first ceremony on french because we had a problem with the car and therefore we attended the one on kikongo. I´ve a lovehate releationship to these ceremonies. I dislike them because they go on forever and I only understand about twenty words. But I love them because it is then the older population of Matadi attend, for example the old ladies with wooden stick, colourful clothes and more gaps then teeth in their mouths. Also it is there that the fantastic choirs are performing. In the beginning of the ceremony I were performing a little bit on my own and played guitar and sang Swedish songs as “jag blir så glad när jag ser dig” and “ han håller hela världen I sin hand”. Add that I followed and repeated after them when they were leaving their collect and you might understand that I became pretty popular.

1 thought on “Back in Matadi”