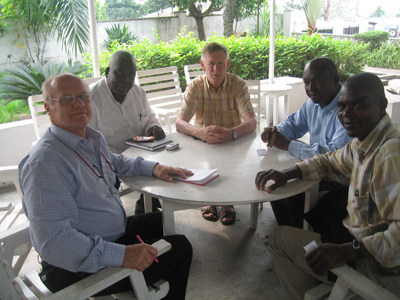 We had a good night´s sleep in Kimpese, and well rested we got up at 7 am. Time to say farewell approached. Breakfast was booked for 7.30, and we planned to leave for Kinshasa by 8 am. But we didn´t get going until 9 am. In Kongo there´s always time and you´re never chased by the clock. Emy and his son David joined us for the trip to Kinshasa and we got the opportunity to share ideas on how Congo could be developed. Because Emy has so many projects going on and is so openminded, he is easy to talk to. He is not stuck in old ways of thinking, instead he always thinks out of the box. Moreover, we have a common language, English. Among other things, we talked about growing cacao trees. Daniel had told us in Luozi what a profitable crop cacao is. For instance, in Ghana where it is cultivated, an employee can get five years in prison if he steals one cacao fruit. That´s proof of the value of the crop, Daniel asserted. We agreed with Daniel that the cacao tree is an interesting crop. When we mentioned this to Emy, he could talk from experience of having cultivated both cacao and coffee. The cultivation itself works excellently in Congo; the problem is to sell the harvest. There are too many corrupt middlemen who claim ”their” share. That had thrown a spanner into the works for Emy. But if we could get rid of the spanner, cultivating cacao could mean welfare for many Congolese. Like this, we shared experiences, thoughts and visions on the way to Kinshasa. It was instructive.

David, 26 years, recently finished his agronomist education. This was the first time we met him, and he seems to be a man with a sound outlook on things, well aware of what it takes to create welfare in Congo. I would like to make use of your experience and take it further, Daniel said.

There are vast areas of land that nobody cultivates, and according to information we have received much of this land is arable. Right now, only grass and bushes are growing there. Many family farms could be set up on the land. Together with experienced Congolese, we will look into the possibility of breaking new soil.

In Kinshasa we had a booked meeting at the Nzo Binati with Ngoma Nsuni, the head of the fruit factory project in Luozi, and the chemist Ngalamulume. We were supposed to meet them at noon. We didn´t arrive until 1 pm, an hour late, but the Congolese hadn´t come either. A quarter of an hour later, Ngoma showed up and another fifteen minutes later the chemist Ngalamulume came. The meeting had to be concentrated and lasted for half an hour. We talked about the plans until November, and we exchanged some thoughts. Emy translated. Ngalamulume was a new acquaintance. He is a likable man and we can communicate with him in English. We exchanged addresses for further contacts. Then we went to the Air Brussels office in town to check in before 4 pm when they closed. Matthieu accompanied us, he knows the routines by heart. Everything went well. After that, we went to the L’Odina Guest House where Yapeco would spend the night before picking up goods for his shop in Matadi the following day. Yapeco had ordered dinner for the three of us. We shared a chicken, fried bananas and water. The food was enough for Pierre as well. Pierre is the chauffeur of the head of police in Kinshasa, and a policeman himself. He had come to get us and take us to N´djili International Airport in Kinshasa. Driving to the airport we got a puncture on one of the front wheels. We assisted Pierre, and fifteen minutes later we were on our way again.

At 9.10 pm the plane took off from N´djili and 1 hour and 35 minutes later there was a stopover in Douala, Cameroon. The plane had been half full when we left Congo, but new passengers in Cameroon filled it up. An hour later we took off again, and we fell asleep almost immediately. When I woke up I noticed that dinner had been served and consumed, a privilege we missed out on. But that made breakfast taste so much better. As the morning broke I wrote this blog, and little by little we saw the sun rise over the European horizon.