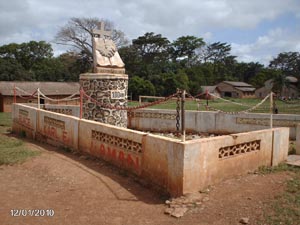 We had now reached the last day of our two week stay in the Congo. Some of us needed to supplement our funds with some more dollars. There was a RAWBANK a few hundred meters from the guest house. With a VISA card it was just as easy to withdraw money here as in Sweden. There was a security guard and an armed police man on duty at the door, so thieves and conmen didn’t have much of a chance. At 10 o’clock we had packed our bags into the bus and left to check in at Sabena’s office in Kinshasa.

Driving a vehicle in Kinshasa is not for the faint hearted. In some areas the traffic is extremely dense. As a passenger and observer I wonder if there are any traffic regulations. It’s all about pushing and forcing your way forward here, or you’ll never get anywhere. I’ve seen one traffic light and it was constantly on red. The respect for red lights is non-existent, or all the road users in Kinshasa are color blind. The fact that the traffic is heavy and that the cars drive far too close is evident on the cars. A lot of them are quite wrinkly and worse for wear. Our drivers drive exemplary though both rush hour traffic in Matadi and Kinshasa and out on the dirt roads where you have to zigzag between holes. Neither vehicles nor passengers have come to any harm. We visited the Culture Centre to buy some presents and souvenirs.

It was then time to check in. This is when I realized that I had forgotten to bring both tickets and passports. Everything was left in our hand luggage in Nzo Binati. This didn’t feel good for anyone and especially not for me. How can you forget the most important things? Sometimes everything that you need to remember disappears from your mind. The memory is good but sometimes too short. Could Matthieu and Gunnel fix this? They were concerned. We were almost an hour away from the guest house. To go back was out of the question. And it never rains but it pours… I had put a padlock on my suitcase and the key was left in my hand luggage. All the bags had to be opened for inspection. Matthieu and Gunnel negotiated and half an hour later the problem was solved. Wonderful for everyone and especially for me. For some strange reason my bag went through without the inspector wanting to open it. Is there a higher power looking over us who compensates for human shortcomings?

The next stop was the Protestant University. Ngwala Ray who is the finance manager received us. He gave us a brief introduction. The university is run by the protestant churches in the Congo. The state gives no subsidies. It was founded in 1959 and currently has 7.200 students. There are four faculties: medicine, theology, law and economy. The medical faculty is supported by the German state through the church. 85% of the budget comes from student fees and 15% from the churches. For medicine school tuition is $600-650/year and for the other faculties tuition is $470. ”We have a big monument here at the university that is donated by Sweden – our library”, continued Ngwala Ray. The Foreign Minister Anna Lind visited the university in 2003 and was supposed to have inaugurated the library a few weeks after she was murdered. The whole library is funded by Sida, the Swedish Missionary Church and the Baptist Church. We were then given a guided tour.

Next to the university is the 100 years church. A colossal church that can hold up to 10.000 visitors. The biggest church I have ever seen. The church belongs to all protestants in the Congo. Impressive and interesting.

And then it was time to go back to Nzo Binati for lunch. Lars-Ola thanked Gunnel and our drivers Dickens and Boudhha for their services and for putting up with us for two weeks. We emphasized our thank you with a gift for each of them. Bernt also tanked Matthieu and enforced our gratefulness by asking God to bless each of them. They will stay to continue working in the Congo. In the afternoon we checked and send e-mails.

At 4.30 we left Nzo Binati. The 30 km trip to the international airport Ndjili was estimated to take about two hours. Despite various traffic jams we got to the airport after just over an hour. We said good bye to our drivers, Gunnel, Matthieu and Jenny. Jenny flies to Johannesburg on Friday and will spend five days in South Africa before flying to Santiago. Saying good bye to one’s children is never easy. It’s a good thing that there is Skype and other technologies that makes it easier to stay in touch. The plane took off at 22.40 Congolese time, one hour after Swedish time. I’m sitting on the plane flying over the Sahara as I write these lines. When I look out I can see a full moon and a clear sky. I can see the lights from communities in Tunisia according to the air information. It’s almost 5.30 and we are scheduled to land in Brussels at 7.30. We travel non-stop from Kinshasa to Brussels.