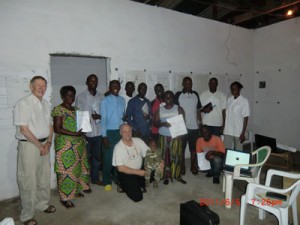 At 10 am, we came to the Nyambudis. The whole group of entrepreneurs were already there. Breakfast was ready and consisted of boiled eggs, oat meal porridge with jam and a mixture of milk powder and water, bread, tea and coffee. The requirements for a good start of the day were well met. When we´d had enough to eat, the spiritual nourishments followed. First, a song in several different languages and then Clement preached about the paralyzed man at the pool of Bethesda, see John 5:1-11. Using the biblical example as a metaphor for Congo, he talked about the inability of the Congolese people to make use of the opportunities available to them. The rich, industrialized world can be of assistance in the process when the Congolese find a way to prosperously manage their resources. This is a challenge for us, and an obligation. We need to give them tools that empower them to move away from poverty to a decent standard of living. We must end all foreign plundering of Congolese natural resources, and help the Congolese to transform their resources to welfare for their own people.

Then followed the entrepreneurial course. We talked about five steps of the course material: 1) the business idea, 2) the business and its surrounding community (customers, market and competitors) 3) how to be competitive (product and marketing), 4) financial planning (budget), 5) how to determine if the business idea is economically sound. The group is very dedicated; they make many good observations sometimes in French and sometimes in English. They really made an effort to express themselves in English. Julienne readily translated whenever there was confusion of languages. Earlier, we had decided that the course day would end at 3 pm, but nobody wanted to quit when the time was up. Anyhow, dinner was ready at 3, and we took a break to have meat, fish, rice and vegetables.

After dinner, Julienne described the thoughts that had appeared during the discussion she´d had with the participants yesterday, about how to structure the Nsanda project. Our idea was for the entrepreneurs to each have their own farming project, that is ten separate businesses with about 1 hectare of land each. But they prefer a solution with one single business, where they are equal partners. We came to the conclusion that this might be a good solution. The business will be called the Nsanda Group, and will have one lease instead of many. The landowners the Nyambudis will be leaseholders as well through partnership in the Nsanda Group. A partnership contract will be drawn up between the partners. Bernt and Yngve will also be partners. As far as possible, all rights and duties will be documented in the contract. By the looks of it, there will be 16 partners. Everyone will deposit $ 340. The deposit can be paid either in labour or in money.

At 6 pm, a first rough sketch of the budget was ready. To make the budget understandable, we had papered the walls with flipchart sized posters. To see all parts of the budget is necessary in order to understand how they are connected to each other. I will put the Nsanda Group budget on an Excel spreadsheet, and attach it to an email to the whole group of partners. All of them except one have access to computers with spreadsheet software. We had planned to end the day at 3 pm, but we didn’t manage to tear ourselves away until 7 pm. That´s committment! Gratifying!