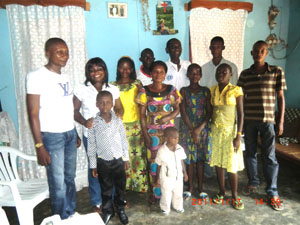 As usual, we started the day with a shower. Most days, the shower works fine but if it doesn´t, we use the scooping method. In every shower room there is a 200 litres barrel filled with water. Nature itself tempers the water, which means it is a chilling, but it is very efficient way to reach wide-awakeness.

After breakfast, we prepared for the ‘Swedish meeting’ that we organized tonight at the Baobab church. We picked out and sorted the photographs we were going to show. Then I went to Yapeco´s office to publish my blog. I saw that Aron in Moscow was online, and I called him through Skype, plugged in the web camera and sound and picture were perfect. Some Congolese boys and girls gathered around me. Clearly, they thought I was mad, sitting there talking in a funny way to myself. But as soon as they understood that I was talking to somebody else through the computer, they got very enthusiastic. I made them say hello to Aron. Then I saw that Jenny in Santiago de Chile was online too, and Jenny, Aron and I had a conference call. Yapeco also talked a little to Jenny. They met during our first trip to Congo, in October. It is always nice to talk to your children, especially when you are so far away from each other.

At noon we went with Yapeco and Samuel to Samuel Nkailu´s home. Samuel had come to get us at the Guest House. We travelled by car for half an hour. The last part of the road, we had to walk one kilometer. Not even Yapeco´s four-wheel drive jeep could manage the road surface in that part of town. And the standard of roads is similar in many parts of Matadi. The walk was rough going; we crossed a gully where we had to jump from stone to stone in order to stay dry. Samuel and his family rent a house together with two other families. The landlord came to say hello to us. Samuel holds him in high regard, and he seemed to be a nice bloke, about 30 – 40 years old. At Samuel´s we met his wife, his daughter Simba and her husband, their 7-year-old son who shook our hands and said ”Välkommen”. The son-in-law opened a bottle of wine and when the cork left the bottleneck there was a bang. According to the tradition this is a good sign, Samuel told us. We had Coca Cola and Fanta. Samuel told us about the activities at the Youth House, and then dinner was served. It consisted of rice, manioc, fried bananas, meat and fish, and pineapple for desert. At the moment, the pineapple is ripe for harvest in Congo. Samuel´s house maintains a high standard compared to other houses in the neighborhood. It is located on the higher part of a hillside and has a view. The son-in-law expressed how happy he was to meet me, ‘Yngve Håkanson’, as he called me. Throughout the years, many e-mails have been sent between Samuel and me, and it is the son-in-law who has been the middleman. We had a good time with Samuel and his family. When later on wanted to take a picture, Samuel´s family suddenly grew to twice its original size. See the attached photo.

At 5.30 pm, the ‘Swedish meeting’ was supposed to begin, but we didn´t get our things together until six o´clock. It was all for the best, as we needed darkness to show our photos. Damas opened with a prayer. I bid everyone welcome, and Bernt held a brief talk on Swedish history. Then we showed the photos from Sweden. David had sent with us beautiful photos of Swedish nature. We also showed some photos from the Sunday service at Baobab, and the audience was pleased to see themselves. Bernt had taken photos of Josef Nsumbu shoveling snow, and of his house. And we showed photos of Swedish traditions. Unfortunately, we couldn´t show the pictures with the quality they deserved, as the screen had a bluish discoloration, but you´ve got to take what you´ve got. And of course we had power failures twice. A somewhat resigned inhabitant of Matadi said ”This is Congo”. The last photos were shown directly on my computer to a few members of the audience. We started to gather our things in dense darkness, when the power suddenly came back. There are bright moments in life. We had about 100 people in the audience, and especially the young people took a great interest in our presentation. It is important that we get to know other parts of the world. That might convince you to act for change in your own environment. Internet is an important tool in this process of spreading information, and it is coming fast in Congo.

2 thoughts on “Dinner at Samuel´s home”