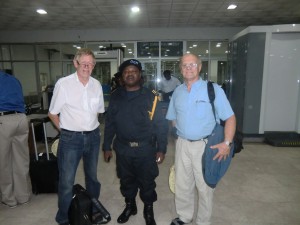 The day began with a gathering at eight o’clock. Everyone were dressed up. The ladies had laid a careful makeup, some had a brand new look and new hairdo. The gentlemen wore tie and suit or jacket. There were a lot of photos taken and I transferred them to the computer and showed them on the big screen, to much amusement. The location of the diploma ceremony was at the newspaper La semaine Africaine and we went there at ten o’clock. The ceremony did not start until half past twelve, one hour late. But in Congo you have time, there is nothing to fuss about.

Edmond, one of the participants of the course, hotel manager and the right hand of Annicet, led the ceremony. Ruth, another participant, gave an eloquent acceptance speech. At that point, it was my and Bernt’s turn to present a certificate to the three MPs. We then held ​a short speech about the two weeks in Brazzaville. Then, the MPs handed over the diplomas to our students and future trainers. I said a few words on the importance of entrepreneurship to society. Finally Joseph, one of the MPs, thanked Bernt and me in English.

After the ceremony there was a press conference. There were about fifty people invited: journalists, bankers and representatives from various organizations, three television companies and a number of photographers. Everything was very well documented. The three MPs started by describing the situation and developments in their constituencies, and they were asked questions which they answered. When this part was completed, there was refreshments with a variety of snacks. Bernt and I had a concluding meeting with the three MPs. We underlined that it is now that the job of the trainers begin, and that they need support to make it work. They agree with us and are committed to meet with them regularly and support them in various ways. We also agreed that our visits in the future will be financed from Congo.

We took a picture of the whole group with their certificates, including the MPs and us mondele. We said goodbye to each other and took a taxi to the ferry which departed at four o’clock. In Kinshasa, we were met by our new friend Teddy Sukami, director on a high level from the Direction Generale de Migration, abbreviated DGM. He was waiting for us in the duty manager’s air-conditioned room. At the passport control, I showed Teddy’s business card to the officials and we were immediately escorted to him. Having good contacts is a great asset. It solves many problems, as well here as elsewhere in the world. In addition, when an influencial person is kind and thoughtful, he/she is invaluable. There are many Congolese with these personal qualities.

Teddy brought us back to his office. He donned his uniform and then he took us to the N’djili Airport. He stayed with us the whole time until we got to the gate. He wanted to be sure that everything worked. Passport control, customs officers and other’s seem to be his subordinates. Teddy introduced us to the airport manager. It was nice to see him, but he didn’t seem as pleased to se two mondele.

First we visited Nzo Binati guest house where we met Yapeco. He was in Kinshasa in business. He wants to say hello to all the Swedes who know him, therefore I present his greeting here. On the way to the airport we drove on Boulevard Lumumba. The two directions are separated and there are four well lit lanes in each direction. Some sections were not finished, but there is certainly developments in the capital. The airport N’djili has also been renovated both indoors and outdoors, a happy surprise. Results have been made from the 50 USD we travelers pay every time we’re traveling from Congo Kinshasa. But there are still people approaching you, offering services that you do not want and do not need. But on the other hand, maybe they are entitled to it, it is probably their livelihood.