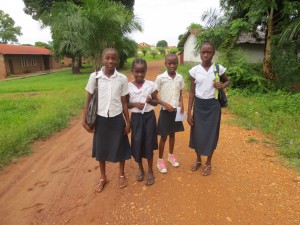 Four school girls on their way to the school at CEC

After a night of even more violent thunder we packed our things and went for the last time to Gunnel for a nice breakfast. Tuesday night, we paid Robert Diabanza for the room, and Wednesday morning we paid Gunnel for the food.

At 9.55 am, we left the CEC Church’s center and headed towards the ferry station, where we waited for over two hours for the boat. The waiting time was first caused by a bull that insisted to linger a while on the ferry. But after it got water poured over it, had some water to drink and was allowed to swim a little, it agreed to leave the ferry and be led ashore. The next timeconsuming project was a load of at least fifty sacks of rice and sugar, as well as boxes of oil. These were carried from the ferry to the riverside one by one and loaded onto a bright yellow truck. While we waited, we looked out over the mighty Congo River, the world’s second largest river.

The crossing went well and we started the journey on the part of the route between Kimbemba and Kimpese that we believe is the worst subsection. Luckily, we have a highly skilled driver in Augustin. He knows the road very well and parries cavities skillfully. We made a stop in one village, where Yapeco bought two bags of charcoal. It’s good to have for cooking when the power is gone. In another village our companions replenished their stock of manioc. We passed President Kabila’s property and after a little more than three hours, we were finally on the better tarmac road to Kimpese.

We had dinner with Hélén in the Pilot villa. She had even made boiled potatoes. We left some letters to various people in Kimpese and we met Emy Miantezila. Then Augustin drove safely and in good speed until we only had twenty kilometers left to Matadi, the first place we got to know in Bas-Congo. There, we were stopped by a severe accident, involving a logging truck. The cargo consisted of three logs of cambala. The timber had not been firmly secured.

The car had overturned in the middle of the road and the driver and his two passengers had died. We arrived shortly after the accident happened. Yapeco and Augustin assessed the situation and decided that we would continue our journey with an acquaintance of Yapeco who stood on the other side of the accident. He would take us to Lisanga, the former missionary residence, in Matadi. We arrived at 9 pm, and got a good place to stay in the presidential villa. After eleven hours and 250 kilometers on the road, our days in had Matadi begun.

5 thoughts on “Drama on the road”