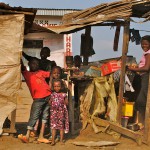 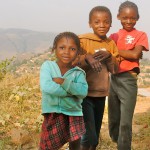 After dinner this Wednesday which consisted of spinach stew and rice, I asked to go out for a walk, Signe and Stig came with me and I got the chance to take many good photos! All calls Moundele after me and almost everyone are very happy to see me! I always ask before I take pictures, and most of them want to be in the picture but some are shy and say no. When the walk was over, we went to a neighbor who gave us lemonade outside her house, it was the same woman I bought bread from my first morning in Matadi. She was very happy to have me as a guest and we talked a bit, with the emphasis on a bit, French with each other. It gets a little better with the french and I’m learning more and more each day. But I have also discovered that sometimes it can be nice to not always understand what they say or be able to talk, otherwise I fear that I would be talking spirit whole day long.

The evening was with watching football and I prepared my teaching for next week. Tonight I made the game memory of the weekdays, numbers, greetings and etc. I’ve also cut out exercise pieces to the students where they will get to draw lines between numbers and the English spelling of the numbers. It´s actually pretty entertaining to figure out different kind of exercises! Because there is nothing wrong with my imagination it will be a lot of games and songs to lighten up the whole thing and hopefully create a joy about learning English.

I have had three major problems the last few days as I am now find some solutions to. The first problem has been the mosquitobites during the night, but now I have learned to tap the mosquito net so tightly under the mattress that they don´t have a chance to enter. Today I also managed to get a good technique on how to take a shower by pouring water from buckets over myself, it’s only taken me almost a week. The third problem has been the cocks and hens that awake me at five thirty every morning and it has been impossible to go back to sleep but the solution here has been to listen to music from my ipod.