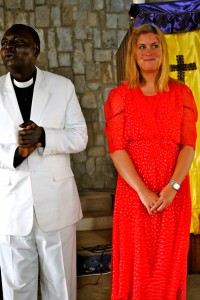 Now i have finally had my first lesson!
There were eight students and I in a small classroom in comparison with those I’m used to back home in Sweden. But it was a very clean and tidy room and no clutter that can often manifest themselves in the classroom at home. Yapeco and the pastor were two of the students and above them there were three men, a woman and two children, a girl and a boy. Lesson one included areas as presentations of ourselves, both in English and French, and general expressions like please, goodday, how are you? etc. I had four different exercises where I think the most appriciated was playing memory. The fact that I can´t speak French was not such a big problem and the lesson mostly went well but there are some details that I’ll think about next time. Something my dad tried to teach me before i went here, was the technology of the whiteboard but unfortunately I´m not always so good at listening when my parents give advice so that’s something I’ll have to think about the next time, for example, write English with yellow chalk and French with blue and always start to the left. Another difficulty is that everyone isn´t at the same level, but I think that’s something that exist more now in the beginning when it comes to general terms such as “hello”, it isn´t surprising that some of them, and others do not. The next lesson that will be about family and animals, I think it will be more equal. Another difficulty is that if one takes a little more time to answer or read the rest of the class are quickly there and will fill out, ofcourse with the best of intentions, but I’ll look up the French call for wait when I get back to my dictionary at home in the house so it’ll probably work out as well. Otherwise, as I said everything went well and I believe and hope that everyone appreciated the lesson. At five, I will have group 2 with the same lesson materials we may hope that it goes well.