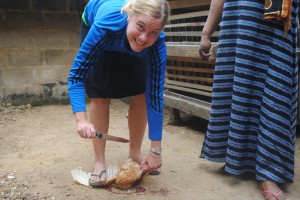 This time I’m the student..

Now I have been here in Congo for two weeks and my career as a Englishteacher is nearly one week long. The lessons is actually going pretty well and it’s getting less and less for every time. I guess it is because I learn more and more for every lesson and I’m starting to get the hang of it.

The pupils are now divided into four classes. In the beginning of every lesson it is around about five pupils but when the lesson is finished they have increased to ten. To be in time here in Congo maybe isn´t the highest of priorities. Because it is four classes and two lessons each day I have this week had two lessons for each class. Today in about an hour I’m going to have the lesson number three. At the lesson two I taught the numbers, days, months and seasons and that included exercises as singing the Swedish songs ten little Indians and Monday I do nothing translated to English lyrics by myself. I have experienced that singing is a very good tool in teaching and It is also highly appreciated by the pupils. Another good exercise is to write an easy dialogue at the blackboard and let each pupil have a conversation with me. In that way it is good repetition for everyone and I get a chance to listen to and help each and every pupil at the level they are.

The lesson this Wednesday afternoon was really something. The power was gone in Matadi, which happens occasionally, and that caused not such a problem in the beginning of the lesson but after six o´clock it started to get very dark in the classroom and we had to continue the lesson outside. But even that became to dark after a while and we had to finish the lesson early. Shortly after that the electricity went back on but then the decision was already made.

The most spectacular event outside the classroom considering myself was that I attended a chickenslaughter at home. It started Thursday morning when I followed Augustine to watch her kill a bunch of chickens. When she asked me if I wanted to try I didn´t doubt in saying yes. I want to take every chance I get to learn something new, after all you never know when it can be useful to know how to kill a chicken. Later in the afternoon I also helped a little bit to take out the increase of the chickens. Even how interesting it is to see and learn new things in a different culture I can tell you that it will take a while before I´ll ever do that again!