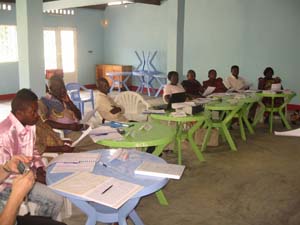 The two groups of entrepreneurs are called ‘Augustine’ and ‘Demba’ after their chairpersons. Today, the Demba group came to us for individual consultations. Bernt, Julienne and Yapeco were in charge of the meetings and I supplied them with the documentation. This morning we also had time to visit the BIAC bank. The money transfer that Ulricehamns Sparbank had helped us with on January 4th had arrived in Matadi on Januray 7th. This was a successful trial transfer, confirmed by the account statement. The bank agreed to cash our international cheque, but it turned out to be quite costly even if they reduced the fee by 50%. I tried to get them to lower the cost further, but then Mr Kiwaka started to complain about me begrudging them their salaries – me, coming from the rich world. Julienne explained to him that we are very careful with the money that is intended for the entrepreneurs – we want no costs between giver and recipient.

We will get the final cost of the cashing of the cheque tomorrow. The Matadi office was going to check with the Kinshasa office if they could go lower on the price. We talked with Mr Kiwaka, who had invited us to his home for lunch when we were here last time. Unfortunately, he was wasn´t very interested this time, and we did not get the attention that we had expected. Last time, he said ‘Our client is our king’. He certainly didn’t live up to that now. One reason might be that he was in the process of moving to Kinshasa. We met with his successor. It remains to be seen if he will put Mr Kiwakas principle to work. On Friday, we will visit other banks and look into how they treat their customers. We will turn every stone and choose the bank that gives the best terms for us and for the entrepreneurs.

Today´s group consists of four members. One member has dropped out of the group as he has gone to France to study. First, we met with Demba, the chairperson of the group. He used to work at the Church printing office in Matadi, but now he has a grocer´s shop that he wants to expand and develop. Our next meeting was with Marie France, a pastor in the Kiamvu Church, who is now setting up a café in close vicinity to the Church. Her business concept is to build up a café for ordinary people. In Matadi the cafés are run by Asians, and they are expensive, only rich people can afford to go there.

The third person we met with was Peter who used to work as a math teacher. But on a salary of $40 a month, he wasn’t able to support his family. Now, he buys and sells flour, and his wife runs a small bakery and sells bread and beverages. Peter wants go into trade in second hand clothes and to set up a sewing shop to make clothes alterations. Last out was Phillippe, an electrician who works part-time. He owns a small farm that he wants to do up and expand with pigs and poultry.

What is left to do with the old group is a joint workshop on Saturday at the Youth House. We will go through all budgets and each and every one will get to show their investment and financial plans. If we have electricity, we will use a computer and projector. It is important that everybody is acquainted with everybody else’s financial plans. Payment of loans will take place during next week, when the bank has cashed the cheque.

To round off, some thoughts: how come the large holes in the road are not mended? And why are the broken parts of the Lisanga Guest House not fixed? The Congolese are aware of all the deficiencies and the standard answer is usually that there is no money. Could it be that the turnover speed is too slow? Could more entrepreneurs accelerate the turnover? Could a more harmonious economy be created if everybody does what he or she is best at, and if they buy each other´s products and services? Or are there other reasons as to why people don’t take charge of what needs to be done? Please comment and give solutions!