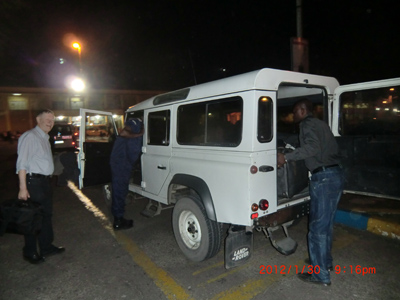 I got up at 3.30 in the morning, had a shower and breakfasted on porridge with blackcurrant jam. The last stuff was packed in the second suitcase, and off we went. The temperature was low, -7°C. The first stop was at Bernt´s in Borås, where we arrived at 5.00. Then Hugo, our MSG transport manager, drove us to Landvetter Airport. The airplane took off at 6.55 and by 8.30 we landed in Brussels. To our disappointment, there was no flight meal served. Considering the fact that the flight fare had been reduced with as much as 3 000 SEK compared to last time, we had some understanding for the lack of food. We bought sandwiches and coffee in Brussels, for 234 SEK.

The Congo airplane, an Airbus, finally left Brussels 11.45 am after several delays due to passengers being turned away etcetera. On this flight, there were ample amounts of both refreshments and food. At 5.30 pm, after having covered a distance of 6 500 kilometers, we landed in Douala. At 7.00 pm, the last part of our journey started, and 8.35 pm, we had reached our destination Kinshasa after another 1 130 kilometers. When we had left the plane and got out on the tarmac, we heard a guy calling out our names, Bernt and Yngve. We followed the caller and were referred to the queue for diplomats and official visitors by the passport examination. From there, we went straight through customs check. Outside the arrival hall, Yapeco and José, the chauffeur of the police commissioner were waiting.

We rode police car to Nzo Binati where we met Tuto. He brought us to his house, where we will be staying until Sunday. It´s a simple house, but it is full of human warmth. The temperature that we measure in degrees is also high, but not extreme. It´s like a hot summer day in Sweden. Tuto lives here with his sister Emma and her son Merje who is 5 years old. A young cousin lives here as well. Because she wanted to stay in the school she had been attending, she moved in with her cousins when her family moved away. Julienne, Tuto and Emmas mother, has come from Nsanda due to the death of a niece and is also staying here. Bernt and I have a room of our own with a double bed. The windows are open, but we have a huge mosquito net to wrap around us. After supper, consisting of omelet, tea, coffee and sandwiches we went to bed by midnight.