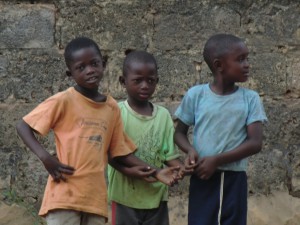 We left Kimpese at 7.30 a.m. The first taxi took us to Bandalungwa, where we switched to another taxi. Next stop was in Inkisi where we visited Pastor Damas Mangikulua and his wife Aline. They have both been in our training and we had a few things to go through with them. The meeting began and ended with prayer and in between we talked about entrepreneurship. Damas inquired about the Baobab Church and Matadi, where he was formerly pastor. Aline gave us Cocacola and biscuits.

At noon we were in Kinshasa but we got stuck in a traffic jam for about an hour. Despite the police’s valiant attempt to untie the knots, it took some time. Road constructions has not had a chance to keep up with the rapid growth of the car fleet. And if you take into account the impatience of the average Congolese car driver, the roads must become clogged from time to time.

The traffic jam delayed our visit to the Immigration Office, we weren’t there until three o’clock. When we got there, we understood there was a problem with our visa. The visa stated that we could enter the DRC only once. On the visa application, I remembered that I had put a tick in the wrong box, but Bernt assured that he had ticked the right box. Anyhow, both our visas stated that we could only enter DRC once. Which was a problem, because now, we were going to Brazzaville and in two weeks we are going to Kinshasa and the N’djili Airport, for our trip home. We had hoped that the word “once” could be changed to “twice” without too much trouble, but no, not in the world of the bureaucratic Congo. We had to purchase a new visa and a couple of extra forms, and the whole bill ended at $233 (SEK 1500). It was an expensive lesson, but it is just to bite the bullet. We tried to tell the official how many time we had been here, and that we are here on a noble cause, at least we think so ourselves. But the official was adamant, his only priority was the rulebook, full stop.

The official said that we could come the next day at 11 a.m. and get our visas, but only if we paid in advance, other methods of payment were excluded. An adversity rarely comes alone. We had not counted on an overnight stay in Kinshasa and we were expected to arrive today in Brazzaville. But we couldn’t do anything about it. We decided to stay overnight at Nzo Binati. There were two rooms available for us three, our companion Yapeco is with us.