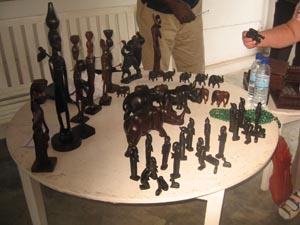 At 5.30 in the afternoon one of the young men who look after us at the guest house came up to us. He showed us his machete and how he protects himself if he’s attacked. The guest house Nzo Binati belongs to the Congolese church CEC. It’s a quiet and pleasant place that is well protected with high walls and iron gates. Just now there was a power cut. We are quite used to them by now. The diesel generator is humming away in the garden and it provides some power. The power failures are a serial story.

After breakfast we set off for the souvenir market in Kinshasa. Here, like in similar places, the will to sell was something quite extraordinary. Bernt bought three beautiful boxes and the deal was negotiated in traditional ‘knalle’ style. The salesman wanted to further reinforce the good relationship between two colleagues by giving the ‘knalle’ from Sjuhärad an extra bracelet. It’s not every day he does business with such a foreign ‘knalle’. Kerstin bought two necklaces with leopard teeth. There must have been some sort of signal between the stands because ever stand that Kerstin passed after that wanted to sell her more leopard teeth. Maybe they thought that Kerstin was a buyer who was there to purchase goods to export to Europe. After that we visited a very well-assorted textile shop that had African patterns in all possible variations.

When everyone had done enough shopping we continued to the offices of Diakonia (http://www.diakonia.se/about). Diakonia cooperates with four local organizations in Kinshasa, Eastern Congo, Bas-Congo and Katanga. Together with its partners they monitor foreign exploiters to make sure that they comply with human rights legislation. They also organize young farmers and monitor their rights, and they work with widows that end up in situations where they are without legal protection. Relief organizations from Belgium, Denmark and the Swedish missionary church also work in the same building. Maria Eriksson-Baaz uses Diakonia’s offices for her research on police violence in the Congolese community.

We are now starting to slow down our pace and I have taken it very easy today. I participated in neither shopping trips nor visits. We have gone through the entrepreneurs statements and we hope to get them translated during next week. There have been a lot of discussions tonight – about big and small meetings. Our group has got on very well together. Everyone has been prepared for it being difficult sometimes with hot and sweaty days. Gunnel Jönsson has worked hard on interpreting for us. Our two chauffeurs Dinckims and Bouddha have tried to make it as comfortable as possible for us with never ending energy. What’s been most memorable and what has touched us the most were all the personal meetings. Right now I have everyone around me and it’s a bit hard to concentrate. Bernt reminds us of the visit to the guard at the farm Seke Lolo, who lived in a house with big holes in the roof and no windows, only peek holes. They had only one bed and the family consisted of father, mother and three children. Hardly a dwelling for humans.

Rebecka has visited us twice today. She came to Sweden as a refugee but was deported. She gave Kerstin a few presents and said good bye. She also sent greetings to Sweden with Kerstin.

Alice also stopped by during the evening for a chat. She studied to be a nurse at IME but is now unemployed. She’s is looking for work high and low. Her husband was a soldier and was killed during the war in 2000. She has four children. She had to leave her oldest child with a relative when her husband died. She now lives with her other three children in a shed in a backyard. Gunnel met her when they were both working at IME. Gunnel, her sister and Kerstin pay the school fees for the three children.

Edi, the head of the missionary church in the Congo, came in to say hi. CEC are having a budget meeting in Kinshasa this week. As Nzo Binati is full of ’mondeles’ (white people) they have had to check in at a hotel next door.

The bags are just about packed. We take back less than 1/3 of the weight we brought to the Congo. Lennart has one present left – a folding rule. The recipients of the folding rules have all been given a piece of advice by Lennart:”It’s important to measure up.” The last folding rule goes to Matthieu tomorrow.