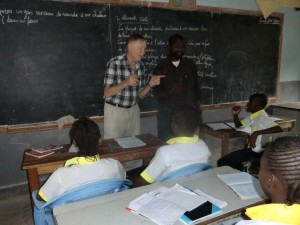 Addressing the future of Matadi at the Belgian School

The day started with oatmeal porridge and a cup of tea, brewed in the Bodum pot which we have now given to our host family. Then, at full speed, we started planning the agricultural project in Nsanda. Currently, we have seven different fields with different plants in different stages. Some plants are absolutely outstanding in terms of crop value per hectare. Some plants such as manioc, takes 2 years to complete of the earth, from sowing to harvest with some seasonal additions, ie, when the earth lies fallow because of the dry season. It can not be so before it starts raining again during the next rainy season. Other plants, such as beans or corn, it takes just 3 months from sowing to harvest, and then we can catch up with two rounds per year. Because of the varying growth circles we must be very careful with the crop rotation, not to deplete the soil. We also planned a new, eighth field where different plants will be mixed.

One thing that we solved today was to write a contract with a seller of our products. Benjamin is his name and Julienne knows him from before. We asked him to tell us about his situation, which is quite dramatic by European standards. He and his wife have five children, and until December last year they lived together in a house. Then came a storm and tore the house down, and the wife and children moved to her parents while Benjamin is staying with a brother. Benjamin has worked on and off for various European organizations, eg. the Red Cross, but at the moment he is out of work. Benjamin gave a trustworthy and reliable impression, and we have decided to believe in him until he proves otherwise. He got a sales order on the fly, which also included marketing a product. We gave him six jars of pili pili paste and 20 USD for a taxi to get around town. He called Julienne during the evening and reported about his activites. As mentioned earlier, I have a good feeling about Benjamin.

Yapeco got home in time for dinner. Among other things, he had been seeing the mayor. And we had been invited a second time to his office at 15h00. This time, we were somewhat delayed but he wasn’t busy when we got there, and we could meet with him straight away. We had a good conversation about relationships and cooperation. We agreed that cooperation is a way to success. I didn’t give him the letter I had written yesterday, however, he got our information binder. But we left the letter and information binder for the governor at the mayor’s office. The mayor was going to meet the governor the following day. We look forward to the reactions to our material and our work from these two leading politicians.

After this satisfying meeting, we visited the private school where the children of Yapeco and Augustine are enrolled. It is a Belgian school. My interpreter, a teacher at the school, claimed that it is probably the best school in Matadi. The primary and the secondary school together have 700 pupils. The pupils in primary school come in the mornings and the pupils of secondary school attend classes in the afternoon. We took a tour and visited all the classes, there were a dozen of them. I was allowed to speak to each of the classes. It was inspiring to talk to Congo’s future, these young people who will shape the new Congo. The mayor predicted Congo to undergo major changes during the years until 2025. Everyone hopes for change, especially the Congolese people who are tired of the order of things as they are today.

In the evening, we went through business dealings we have together with Yapeco.

We had a good finish in Matadi. Tomorrow we travel to Kimpese.

2 thoughts on “Good finish in Matadi”