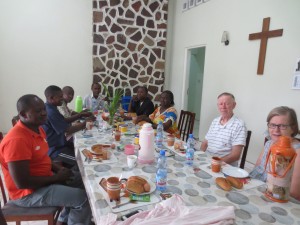 After breakfast we had a meeting with the Church director Edi Diafukana. In two years, he wants to go to Sweden to work for two years. He has been in Sweden eight times before, and is fluent in Swedish.He will be coming to the Church conference in Gothenburg in May.

Edi raised the question of the Luozi fruit plant, Prodibas, and Yngve reminded him of the three criteria that must be met before the plant can be realized. There has to be 1. Access to electricity in Luozi, 2. An examination of the raw material supply in the area and 3. Financing. Edi has spoken with authorities in Kinshasa about access to electricity, but so far nothing has happened.

When we checked MSG’s bank account, we were pleased to find that an additional 6900: – SEK has been donated for the benefit of the campaign “Light a solar lamp in Congo”. The campaign now has raised a total of 36 000: – SEK. That means we can sell 120 packages of lamps for 100, – per package. Each packet contains 2, 3 or 4 lamps. We truly thank all who has contributed to light a solar lamp in Congo.

The afternoon meeting took place at the Church’s largest university, the Protestant University with approximately 2,000 students. The first person we met was Wanani, a theology student who is supported by the Mission Church in Rimforsa.

As the financial manager of the university, Ngwala Ray, is known in Sweden, we got to talk to him too. Yngve talked and Nsimba Anderson translated. It was noticeable that Ngwala had heard about MSG’s work before. Yapeco’s son Stig is studying law at this university, and he has also met Ngwala before.

We met Ngwala when we were here in the autumn of 2010. Now he said, “I’m glad to know what you are doing for my country and my province.” Yngve gave him the two binders and the letter from MSG, all in French. Ngwala talked about how important it is for students to learn a profession. You can not perform well if you have not learned first. He will inform the professor of economy of our meeting.

We went by a store where Yngve bought a modem to use in Kimpese and Luozi. Then we went back to Nzo Binati, where Albert met us at the car door with a large umbrella. It was raining cats and dogs.