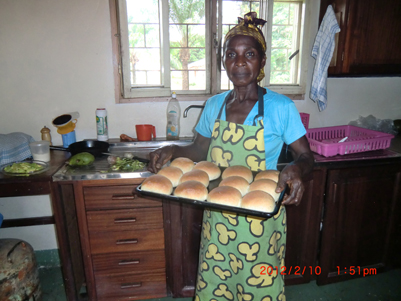 Pauline is baking bread for us

After the usual morning ritual, Yapeco, Bernt and I walked to the head office of the CEC Church. Our interpreter, Julienne, was already there. We were going to meet the committee of the future juice factory. Both the Church superintendents joined us. Chairman Ngoma Nsuni Celestin and the chemist André Ngalamulume had arrived from Kinshasa. There are several important persons in this group. André has taken our entrepreneurial course, and Ngoma has participated one of the course days. Today, there were thirteen in the group. Edi held an opening speech, and prayed that God would bless the project. We will need a lot of God’s blessing to pull this project ashore. Bernt related the history of the project, and I presented the drawings that I had developed together with the Italian machine supplier. With the help of some consultants, we have compiled a cost estimate. The estimate amounts to $ 5 million.

We explained to the group that the work we’ve done so far is related to the effort required as a peanut relate to an entire bag of peanuts. No one should be left uncertain where we stand today in the project. We suggested that the next step should be to solve three important issues. (1) Financing, (2) inventory of raw material supply and (3) the routing of electricity to Luozi. The group appointed members to take responsibility for the continued work in each area. The plan is to have these issues solved in September – October. After the meeting we went to the site, a good, flat plot of 5 hectars. There is even room for some fruit-growing on the site.

Most people who have heard of the project have sung the “hymn of impossibility” for us. We have listened with great seriousness, and learned their message. At the same time, Bernt says: ”The only things that are impossible (in Swedish: ”The only things that don´t walk”) are small children and broken clocks”. Bernt´s point of view has quite a few sympathizers. The future will show which approach is the more correct. It is said that pessimists are often right, but the optimist has more fun along the way.

During the afternoon, we visited a project in Luozi that is governed by the European Union. We talked for a while with the French manager, Sylvain Berton. The project is called Agrisud International, and works within a radius of 50 kilometers around Luozi. Their target audience is farmers, whom they educate and give grants in the form of seed, but they also support other kind of enterprises. They organize the distribution and the selling of the produce of the enterprises. Agrisud International are working in twelve African countries, and today, they cooperate with more than 900 farmers in the Luozi area. Their goal is to involve 2 500 farmers in the project. The organization has 25 employees, and the project will last for four years..

Today has been less hot, it has been cloudy but there is no rain in sight and the crops keeps withering. It is very dry. Robert Diyabanza came to see us last night. He told us that they had had a similar weather situation in 1978, and it had caused a severe food shortages. We had 28°C indoors. It is a little to much.

Thank you for all the prayers and happy cheering posted on the website. It feels encouraging. We gladly accept more of these lovely grains of gold.

1 thought on “Hymn of impossibility”