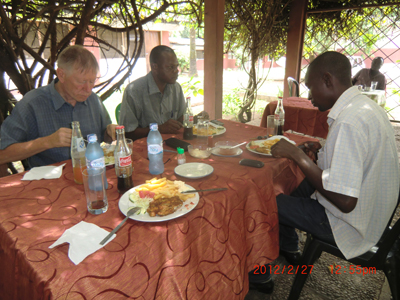 First thing today, we sent Tricya and Merje off to school. They were both very neat in their white blouse/shirt and navy blue skirt/trousers. Tricya who is 16 years old is in Secondary school. She is the cousin of Emma and Tuto. Merje, 5 years old and the son of Emma, is in preschool. Tricya´s family moved away from Kinshasa to Luozi, but Tricya didn´t want to leave her school, thus she moved in with her cousins. In Congo the concept of family is much wider than the nuclear family. It was great to see how Tricya took care of the child of her cousin. Hand in hand they first had to walk 1 km, and then go by taxi for another 2 km. Emma gave Tricya some money for the taxi. Tricya told us that the subjects on her timetable today were mathematics, English, history and philosophy.

Then we went to breakfast. And I realized that I had been completely wrong yesterday – oatmeal porridge was not an unknown phenomenon to Emma. Order was restored. Porridge on the table – wonderful!

Emma was also going to school today. She takes a course in computer science. That´s a very good investment and and something that will complement her law degree. So far, she hasn´t been able to find a job. Bernt and I met a businessman in Kinshasa whose company will invest 800 million SEK in Congo the next few years. We will forward Emma´s CV to him. He didn´t have a suitable job for her at the moment, but there might be something in the longer term. He would gladly receive her CV.

Then we went to Air Brussels office in town to check in. We got there one hour before opening time, and while we were waiting for them to open we went to a souvenir market., Tuto, Yapeco and I. There were different kinds of fantastic craft, and I bought two carved Congolese, one man and one women doing traditional work. Earlier, we have bought other wooden figures that we have planned to use in our exhibitions at the city libraries of Alingsås and Borås in March this year.

When the shopping and the checking in was done, we had two more scheduled meetings in Kinshasa. We were going to visit Procredit Bank and ask them if they were interested in taking part in our solar cell businesses. But this meeting came to nothing. The lawyer that Tuto had engaged didn´t show up, his mobile phone was switched off and he was impossible to get hold of. The other meeting was with Ngoma, about the juice factory. This meeting was not very important, but we had set aside time for it. He called when we had come to our meeting place and said that he had changed his mind. Instead of meeting us, he was going to see a person about energy issues. In that way our other meeting came to nothing too. An important lesson for the Congolese to learn is that arranged meetings and appointments must be kept to time and carried out. If you want to do business it is important to keep your word, or you will loose your credibility. Then you have lost a necessary qualification.

We had lunch at the Catholic church center for the disabled. “Centre du handicapés” is situated in town, and we recommend their restaurant. On the meny today was french fries and fish, very tasty. The center is an oasis in the middle of a hectic metropolis.

At 3 pm José, the chauffeur of the police superintendant, came to pick us up and he drove us the 30 km to the Airport N´djili. José is a skillful driver and we were there within one hour. He handles the police jeep with incredible precision. On one occasion he folded down the rear view mirror to get us through the eye of a needle that often arises in the chaos on the roads. We noticed that other drivers have respect for a police car, and that police cars have priority in crossings where policemen are directing the traffic. We witnessed two car crashes today, but that´s normal. But there are also indications that the culture on the roads will improve. The larger roads are getting better. And we see more and more traffic lights of the latest model hanging from arches above the roads. The traffic lights have, besides the usual stop or go, large arrows to show the direction and a digital clock that shows how long you have to wait for the green light. This seems to be a brilliant idea. Because when there is a Congolese behind the steering wheel, speed is essential.

We had to wait for a few hours at the airport. Most of that time was spent sleeping. Bert said that that would be the most innocent thing to do, thus we did just that. At 9.50 pm, the plane left Kinshasa and we left Kongo for the fourth time. We felt content about what we had accomplished these four weeks. Only the future can tell what results will come of it, but we believe in Congo. We think it is a country in progress, a conclusion we have reached after having spent a total of three months here, working and living and discussing with Congolese men and women for hours and hours.

4 thoughts on “I was wrong”