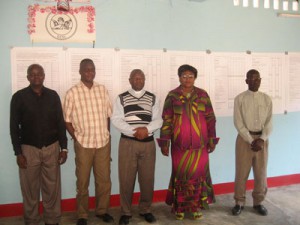 It´s lovely to be able to take a walk in the morning. Although Matadi is quite a big city with a lot of traffic, I have found walks around the church area ”Lisanga”. Today I dropped by a cement foundry during my morning walk. A friendly Congolese greeted me and showed me around. He was probably the owner, but I couldn´t ask as we didn´t have a common language. They produced concrete bricks and other smaller building parts in concrete. Because I am familiar with this type of building material, we didn´t have to exchange many words in order for me to understand how the production was set up. They mix the concrete manually. They have a small machine with a vibrator where five bricks are made at a time. Then, the bricks are put in rows on the ground for the concrete to burn. I visited the factory at 6.30 am on a Saturday morning, and they had just started their workday.

After breakfast, we had a meeting in the Youth House, and the first group to report was the Augustine Group. It consists of five entrepreneurs from the first round, and they took the course in October last year. We had to wait 45 minutes for the last ones to appear. It´s not good practice. Of course there are Swedes as well who have the unsound peculiarity of always being late, and you cannot ignore that the habit is disrespectful. It ought to be possible to change – keeping the time must be the best practice for all parts. A positive development this time was that the person who was late was aware of his action, and apologized. Apology was accepted by the rest of us and the meeting could begin.

Everyone accounted for their investment and gave a progress report including both successes and setbacks. One part of our policy is openness, but one person in the group had problems abiding by this specific part of the policy. We know through other channels that this entrepreneur is doing fine, but in front of the group he had difficulties giving a proper description of his business. Sometimes, we just have to accept each other´s oddities. It´s interesting to see the different personalities of the group members. We went through the accounts we expect them to deliver onwards. Next time, they are supposed to report the figures of the actual budget compared to the budget they drew up during the course. This will be published on the website. The purpose of the reports is to give the lenders in Sweden an understanding of the progress of ”their” entrepreneur.

The Demba Group, which consists of four entrepreneurs, arrived at 11.30 am. The openness is greater in this group. So far, all entrepreneurs of the first round of entrepreneurs seem to be doing alright. We decided to meet again on Monday for individual talks about the budgets. Their homework was to work through their budget once more. Some of them might need to adjust their budgets. We sent them home with the budgets either on an USB stick or in the e-mail inbox. Next week we are going to visit the entrepreneurs on location. Already today we saw the first visible proofs of entrepreneurship: Axel Biongo, who lives on the church area Lisanga, is keeping 180 chickens in a chicken run next to the dining room at Lisanga. He will break the record of shortest distance between producer and consumer I think, because as soon as the chickens start to lay eggs, he will be the supplier of eggs to the restaurant. This will be both climate friendly and something for Guiness book of world records.

1 thought on “In a chicken run”