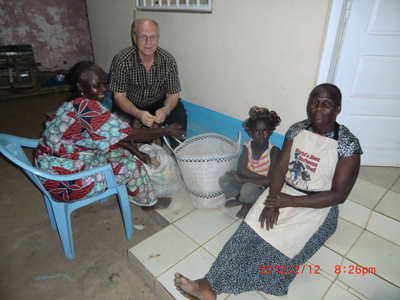 Peeling peanuts for seed at Nsanda

Today, our awakening came about in a more orderly fashion than when we last time spent the night in this house. Then, there was a cock who took his night and morning walks outside our window, crowing at full volume. Because of this misdoing, he was put under arrest last night. He had been found guilty of disorderly conduct, a offense leading to custody here in Congo. That also goes for cocks.

After breakfast we talked for a while with our hosts, Nganga and Thresia, about the hotel and restaurant that they are building. They are very commited people, both to the community and to their church. They were retired recently from senior positions at the cement industry just outside Kimpese.

Yapeco and Nganga went into town to book a taxi. The taxi driver came to our address with his Mitsubishi van. We packed our things and left Kimpese by 11.00 am, heading for Matadi. Our driver Mbomba conducted his car calmly and confidently. At 1.30 pm we arrived in Matadi. In Matadi, we met with Curt Olofson and his group of five persons. Since the guesthouses were occupied, we got a temporary place to sleep next to the restaurant here on the Lisanga property.

After dinner, we detailed the next two weeks of our stay in Congo. We will spend much time on follow-ups, but we will also give some further education to entrepreneurs already in the business loan program. We had intended to meet the governor, but he had had to go away because of the airplane accident in Bukavu. If he returns while we are still here, we will try to set up a meeting.

Samuel Nkailu came to welcome us. We talked for a while about the progress of the Youth House. Right now, they have a sewing course for five girls, and they use the three sewing machines they were given in inaugural gift. They have four boy groups with fifteen boys in each group. Each group has a football of their own, and they play football every other week. Luthelo Muller, son of Matila, the chairman of the Youth House, has had political meetings in the Youth House. He and two others from Matadi have been elected to Parliament in Kinshasa. Samuel also has gatherings for the children of the pastors in Matadi, as well as gatherings for the pastors themselves. They are planning to have meetings for church leaders, with a focus on song and music. We will also be using the Youth House in our entrepreneurial course. A ceiling is about to come in place. MSG made a commitment at the inauguration, to contribute the material needed for the ceiling.

2 thoughts on “In an orderly manner”