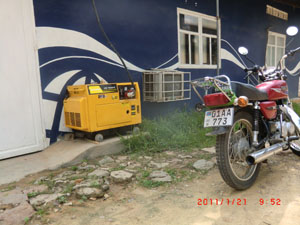 Last year, I listened to a well-known business executive in Borås. He talked about a period of time when his company had been in a critical state. He and his closest co-workers worked intensively together. To be able to work almost 24 hours a day, he suggested that they should sleep together. His wife had to move out, and his nearest co-worker moved in. Every waking hour, they conferred about solutions to the difficulties of the company. Bernt and I have slept in the same room during this stay in Congo, because we don´t need more private space. Primarily, we made this decision because of financial reasons. But, as it turned out, we didn’t save any money. The local practice is to charge you by the number of beds you use, not by the number of rooms. However, we have discovered another advantage. In the same fashion as the executive and his closest man above, we have spent every waking hour discussing the challenges we are facing. It works just fine to draw up good solutions in a horizontal position. Later, we heard that some Congolese have been somewhat apprehensive about us sleeping in the same room. They have drawn the conclusion that we might be having a relationship. We didn´t have the faintest idea that we could cause offense. We have assured all our friends that they needn´t worry the least about us – the last time we slept in the same room was 55 years ago, in a fisherman´s shed at a Covenant Church youth camp.

Electricity has been gone all day and returned at half past two. So far, this is the longest power failure we have experienced. I didn´t have any battery time left on my computer, so the only thing we could do was to lie down and rest, and that is what we have been doing. After breakfast, I went to publish my blog, but the Internet Café didn´t have any more electricity than the Guest House. Without any success, I had to return. After a while, the manager of the Internet Café came to tell us that the computers and the internet were working. He had started the generator Yapeco bought with a loan from MSG. It feels good to witness the practical consequences of a loan. When I was done, the diesel had run out due to lack of planning. This will be rectified.

After dinner, I went to the Internet Café again to continue some other work. The generator had not been refilled. Yapeco couldn´t get the necessary diesel, as he wasn´t at home. I gave the manager $10 to go and buy fuel. But by the time he came back, electricity had returned, thank heavens. The diesel he bought will come in handy during the next power failure.

Julienne needed to get a passport, and she and Yapeco went to the centre to sort out the formalities. They went after breakfast, and came back by half past two. Julienne was prepared to stay until Tuesday in order to get her passport. When they came back, she was very happy. Through Yapeco´s skilful ways of handling people in authority and his great network of contacts they had solved all the formalities. True, she had to pay a $75 bribe, but now she can go with us tomorrow to Kimpese and then onwards to her home in Luozi. Such is the bureaucracy in Congo.

During the afternoon, I made print-outs to the first group of entrepreneurs. The print-outs were of the loan deeds and the budgets that will be followed up month by month. Unfortunately, we couldn´t pay out the loans because of the slow working of the bank. Yapeco will have to take care of the payments next week. I will prepare all the necessary documents and put my name to them on account of MSG.

Bernt has inspected the tin roof of the Youth House. There are some holes in the roof, and it leaks when it´s raining. We used a couple of buckets to catch the running water when we were there. Bernt have a few ideas of how the holes can be mended. That will be an assignment for our next visit.