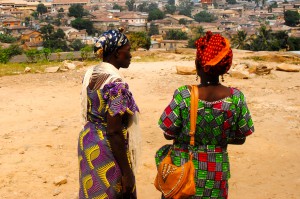 This Friday I was at a Congolese funeral. It was one of Yapecos friends’ mother who had died at the age of 85. I did not understand at first that it was a funeral. It was outdoors outside a hospital and they carried out the dead (in coffins) from the hospital to a plateau outside and there was a chorus and relatives out there that were placed around the coffin and sang. All around everything was other people and watched. A big difference from Sweden was that the songs were pretty excited and it was dance aswell, and the clothes were also colorful.

Afterwards we went and picked up Augustine who had been in Kinshasa for a week. She is very nice and kind and it’s great that she has returned. She had even brought a gift to me from the capital, a very nice silver ring. Her sister and two children were visiting in the afternoon and we spoke a little English and French with eachother and I discovered that I actually have learned a lot since i arrived and that’s fun. In the evening I tought Stig and Signe the cardgame: finns i sjön and another card game and then the evening was saved.

There were two church services this Sunday too, but both were in the Baobao Church this time. The first in French and the other in Kikongo. I understood more of the sermon in French this time than I did the previous Sunday which is positive. I think it would have been very interesting to learn more of Congolese indigenous language Kikongo and not only the French that became the official language with the colonization, but because it is French that I can have benefit out outside Congo I’m focusing on that and it is difficult enough. But I’ve learned “m’bote” and “tutondele” in kikongo, which means good day and thank you. At the cermon in kikongo the priest introduced me and greeted me welcome in front of everyone and then I said “tutondele” to general delight and appreciation. Afterwards, we had a short meeting with the students from the church that will learn English. They were a little concerned about me not speaking French, and so am I but I hope I will convince both myself and them about that it is going to go well anyway at my first lesson today.