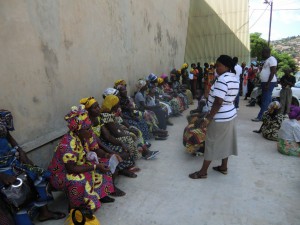 Participants outside the church

During the morning session, I put together letters to the mayor of Matadi and to the governor of Bas-Congo. We don’t seem to get a meeting with the mayor during this stay. When we were supposed to have met him, he had prioritized other things. But instead of our presence, he will now receives a letter and our information binder. The governor will get the same information. The governor of Bas-Congo was inducted only yesterday and his name is Jacques Nbadu.

At 10 a.m. we went to the Baobab Church for the Kikongo service. The service follows a quite strict order in the Baobab congregation, controlled by a leader of the meeting. The agenda is as follows: Prayer, confession, creed, worship, joint songs accompanied by drums on a couple of occasions. There are no organ or other keyboard instrument, not even to procure around here if you wanted to. Today there were three female choirs and one male choir. A parish pastor was in charge of the welcoming messages. Those who were in the church for the first time received special attention and those who where from other locations were also recognized. The two mundele, i.e. Bernt and I, had to go up to the podium to the sound of happy cheers and loud greetings.

Today’s sermon was about the choices we humans face, the good choices, the less good or the evil. Then came the offertory, when everyone brought their offerings to the baskets by the podium. Some people were dancing in the aisles. First in line were those who were paying tithes. When they were done, Julienne Kukangisa spoke and prayed particularly for them. After the offertory we received information on upcoming meetings. There were many items to announce and it took almost half an hour. Then Augustine informed the congregation about a group of women in the church who take special responsibility for the economy. Bernt and I, interpreted by Julienne, said a few words and received a lot of greetings for Sweden. Finally, the service ended with prayer and the blessing. Today, the service lasted 3.5 hours. A Congolese service is a lively event, both from person to person and from people to God. All the time there is dialogue between the speaker and the congregation and with God. There is no chance to fall asleep.

Today Augustine drove us to and from church. Yapeco is one of the church leaders, and he had also taken part in the French church service that had begun at 8 pm. After the two services, he had church business to attend to.

At 2.30 p.m. dinner was served and then it was time for a restorative siesta. Today has been very hot and the heat reduces the possibilities of any major activities. But Sunday is in fact a day of rest, and we are probably allowed to take it easy.