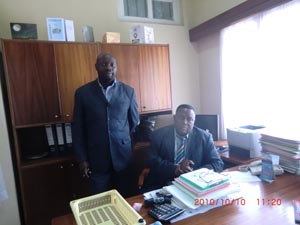 Breakfast was served as usual at 7.30. At 9 o’clock we had a meeting with the Global Group in the Baobab church. Gunnel interpreted and represented Blidsberg. Kerstin and I represented Hökerum. Blidsberg and Hökerum are small churches in comparison to Baobab. This church has 1.400 members and 720 children in their Sunday school. They have 10 choirs: for children, youth, women and men.  They run hospitals and primary and secondary school.

The pastor of the congregation, Damas Mangikulua, had put together a proposition for an agreement between our three congregations. We’ll bring home the agreement for signatures. We presented a proposition for the end of the year of common causes to pray for. I suggested that we develop ‘face to face’ that was recently launched in Hökerum to also include exchanges between teenagers in Matadi and Hökerum/Blidsberg. We also need to work towards having a common language. Kerstin and I promised to study French and GG in Baobab is studying English. We’ll check in on each other from time to time to see how far we have got. We gave the Baobab church a Swedish flag. As a gift from Baobab we received two wooden Congolese figurines. Very beautiful.

At 12.30 Mr Kiwaka met us at the guest house and we followed him to his house in our bus. His house is well protected by high walls and iron gates. We were invited into a large room with air conditioning and two turned on TVs. A long table had been set. I had jokingly said at our first meeting that we were going to speak English today. He had taken me seriously and had hired an English speaking interpreter. Gunnel got to take the afternoon off except for a prayer by Bernt before we left.  Mr Kiwaka welcomed us and said a prayer for us and our meal.  We were treated to an impressive lunch.  Meat in different forms, fish, shellfish, potato, manioc, fried bananas and vegetables. Drinks were alcohol free wine, Fanta and Coke. Dessert was banana papaya and pineapple.

Kiwaka told us that his wife Silvia had planned the dinner.  She came in and said hi but didn’t sit down. ”I’m a Christian, I have Jesus as my role model, my parents were lay workers in a church in Kinshasa”, continued Kiwaka, “and I really appreciate that you want to come to my home.” The children also came in to say hi. The smallest one was a very pretty girl called Victoria with lots of braids and curls, a real charmer who walked around the table and greeted us with a big smile.

We handed over our training folder and welcomed him as a member of the Matadi Support Group. He accepted the membership immediately. Lennart gave him a folding rule. Bernt came up with four pens. Kiwaka wanted his wife to have one too. Before we said good bye he said I could call him any time.  We got all his phone numbers, both to him and to his wife.

We hope that this contact will be useful for our work here in Matadi.
During the afternoon Lennart and Lars-Ola held separate meetings with the entrepreneurs.   Bernt and Hugo listened and gave advice. This kind of training was new to the entrepreneurs, but they were all positive.  Eight out of ten had understood the content well and presented the four parts from business idea to budget – both for investment and operations. However, they wanted to borrow considerably more money than we had expected. We’ll take their presentations home and make an evaluation.

For supper Hugo had got the ingredients for mikatti (Congolse ‘donuts’) and the kitchen had made them for us.  What a delicious surprise! There were some mikattis left over for the trip to Luozi the next day.

The rest of the evening we spent packing and getting ready for the next part of the trip.  Since there is no electricity in Luozi I might not be able to send the blogs. We’ll try with the help of solar panels and battery.