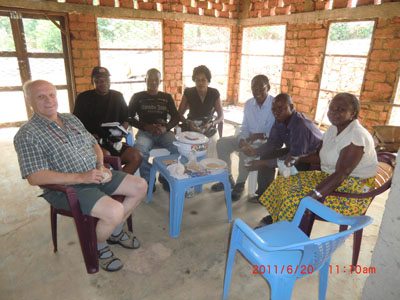 When I opened my inbox this morning I’d received an e-mail from my dear wife. She congratulated me on our wedding day. Surefire, I remember that day like yesterday, but at this early hour in the morning the memory of it hadn’t surfaced before reading her e-mail. Great days are well stored though. It has been 42 years since we got married. Where have all the years gone? They seem to pass quicker and quicker the older you get. I sent her a reply, and on the skype chat later that evening we exchanged flower smileys. The electronic aids come in handy.

Today we visited Daniel and Annie Bimpe, who we had met earlier last autumn. We had asked him before leaving Sweden if we could come see him about starting a production of wood stoves. He´d promised to deliver a draft and an estimate of price per stove. If the price is right, we will proceed with production plans. If the Congolese could use wood stoves instead of cooking over open fire, there would be a tremendous saving of wood which in turn would benefit the environment. The implementation of wood stoves in Sweden revolutionized cooking, and it ought to do the same for Congo if it is possible to produce them to a reasonable price.

Daniel and Annie own a workshop and they have 30 employees. The workshop that we saw in the middle of its construction last autumn was now ready and in use. The production was in full swing. A diesel generator makes sure that all engines, an electric welding set and other electric tools can do their job. In Luozi, a city with a population of 15.000 citizens, public electricity has yet to make its entrance. We had been planning to raise the issue with the energy minister of Bas-Congo in Matadi, but he managed to stay away when we were there. Despite the lack of electricity, Daniel says Luozi has its advantages. There are good, trustworthy people to employ and the salaries are lower than in the bigger cities. Besides the workshop, Daniel has a lot going on. He cultivates soy beans and the old workshop has been remade into a chicken and poultry farm. The birds are soon moving in.

In the workshop, he makes engines for milling and refining soy beans, manioc, corn and other crops. Daniel and Annie held a lecture about the soy bean. They made clear to us what an efficient foodstuff it is for both people and animals. In the future, they are planning to produce mineral enriched soy fodder. The foundation for a fodder factory is already in place. We got to taste a powder that is an ingredient in soy milk. After the soy bean, they told us about the benefits of the cacao tree. Maybe we should plant cacao trees in Nsanga? Daniel is always on the go, and you have to be attentive to keep up with him. He speaks in English, which he learnt when he lived in Ghana and Cameroon for ten years during one of the Congolese wars. He is an innovator with many ideas and visions. Judging by his commitment and enthusiasm his primary outlook is ”what can I do for Congo?” and not the opposite. It had been an interesting visit, and we left the Bimpes with many thoughts.

After dinner we engaged in writing and signing contracts between entrepreneurs and lenders. All agreements are documented as far as possible. We also adjusted some of the leasing contracts.

2 thoughts on “Many irons in the fire”