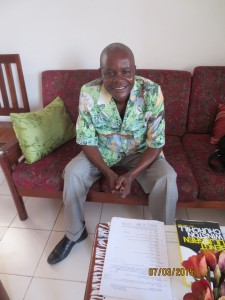 Today we are cooking for ourselves. The other days Yvette comes here to cook dinner for us. At 10 o’clock, Joseph came and picked me up. He had scheduled a meeting at the Forum for Young Entrepreneurs, a Catholic organization that actively works to provide training for and financing young entrepreneurs. Our organizations have a lot in common, and the meeting was fruitful. Christian de la Bretèche, a retired Frenchman, is manager. His closest man is general secretary Paul Kampakol. Paul’s brother is Guy Rufin who lived ten years in Sweden where his wife and children still live. He is a lawyer and works at the Ministry of Justice.

We informed each other about the activities of our organizations. Billy and Joseph know Christian and Paul from before. Christian has been teaching Billy and Joseph and Christian have been members of the same board of directors. The purpose of the meeting today was to build networks. We concluded that 1 + 1 is more than 2, or as Billy put it “on our own we are weak, but together we are strong”. They have begun a collaboration with four universities that they think would benefit from conducting entrepreneurship education. We have reached the same conclusion: the training should be performed by professional trainers.

After the meeting, Joseph came with me to the stores, and he wouldn’t let me pay. He followed me all the way home, and also paid for the taxi to Saka Saka. He arranged two more meetings with Patrice N’Souami, the director of the CEC Church on Monday, and with Mr. Mampouya, principal of the faculty of Agronomy in Mansimou on Tuesday. We met Mr. Mampouya in the street and had a brief talk with him.

It feels good that our friends André, Billy and Joseph are so interested. And they keep asking me how CSG think in various matters. I declare the thoughts and ideas as clearly as I can, and usually end my declaration with “take it or leave it”. In this stage, I can only pass on our ideas and experiences, not carry them out.

They arrange everything about and around our meetings. My hope is that we sow a seed that eventually will give results. And that we can build a solid network between Congo and Sweden concerning entrepreneurship.

3 thoughts on “Meeting at the Forum”