We came to Boko at eight o’clock on Saturday evening, after driving 150 kilometers from Brazzaville. We went in three jeeps and all three had the signs of an official delegation. Each MP has two secretaries and two armed bodyguards including one driver. We were quite a few people who, when we got to Boko, checked in at a hostel in town. The hostel is owned by Annicet and Boko is a base in his constituency, which consists of about 25 villages. After dinner we discussed the arrangements of our visit in Boko, and then it was bedtime.

The morning program included a shower with a bucket and breakfast. Then we went to the church here in Boko, but the congregation hade gone to a neighboring village yesterday and had not come back yet. The service was therefore canceled. At 11 a.m. there would be another meeting here in Boko, at the people’s houses.

We were greeted by singing, dancing and drumming. Some of the younger participants were wearing masks. We sat down together with Annicet, José and Joseph on the podium. The hall was packed and there were people looking in through the windows and doors, I guess there were about 200 people. As we are in Annicet’s constituency it is he who has the initiative and who sets the tone. He, José and Joseph all hold fiery speeches with much applause and dialogue with the spectators. A local female party colleague gave the welcome speech and another woman prayed for us. Public prayer in Congo is never brief, but always extensive. The closing prayer was performed by a man.

Using our interpreter, Judicaël, I presented a Power Point after some technical hassle which included have to change the projector. After the presentation, we answered any questions. It has been very interesting to see how politicians face their constituents. Then, there were also questions to our friends, the politicians. They had to answer some tough questions about what the do and do not do.

The next meeting was in Mbandza Kaka. To get there we had to go thirty kilometers on dirt roads which mostly consisted of deep holes and ditches, some filled with water. We had four strong jeeps but our jeep got stuck anyhow. The employees of the politicians threw off their shoes, rolled up their pants and helped push the car in the mud. Everyone wanted to do his bit. We did our by getting out of the car. With the towing of another car and the pushing of the many men the car finally could roll again. Our second unintended stop was on a steep slope. There had been a light rain and wet mud and cars do not go well together. Everyone had to leave the cars, the cars had to accelerate before the hill and try to keep the speed up to the crest. After several attempts on the behalf of each car everyone was up the hill. We boarded the cars and set off again. The last involuntary stop came when it was already pitch dark. A front wheel of one of the cars got locked. It took a stiff one hour to repair. The thunder lit up the sky, but it didn’t start to rain. While waiting we had great conversations with our friends. There is much to be said about roads and transports in Congo, but this will do for now. We were back in Boko at 10 p.m., literally pretty shaken by the 100 kilometers dirt road trip.

At 3 p.m. we were in Mbandza Kaka and about 2-300 had come to the meeting. As in Boko, we were welcomed with song and dance. The meeting was outdoors in the shade of large mango trees. The format was the same here as in Boko. Five villages had gathered and their uniformed head of the village was there. The village council sat on a special bench and there was a secretary who wrote the protocol. A tv crew followed the whole meeting. Bernt, Judicaël and I talked about MSG. In the morning we had seen a feature from this Saturday’s filming. When we were back in Boko at night, the same feature was running. The program was aired in the replay. At the meeting in Mbandza Kaka, there were several villagers who spoke. As many women as men spoke what was on their mind. Equality and democracy are under way. The village chief told us that the school was built by Swedish missionaries in 1959. The name of the person who had been in charge was Marianne.

The last and largest meeting was in Mfouta. There were 400 people gathered. Also this meeting was held outdoors. It started at 5.30 p.m. and lasted until 7 p.m. and the same program as in the other two villages was used. There were a lot of singing also included in the meeting. Meetings in Congo are certainly alive. In Mfouta, Annicet received gifts. He got two live roosters and a sack of foufou, i.e. processed cassava. We had the roosters in our car on the trip back to Brazzaville.

At 2 o’clock at night we were back in Brazzaville. We have had a long day with many good meetings and experiences. 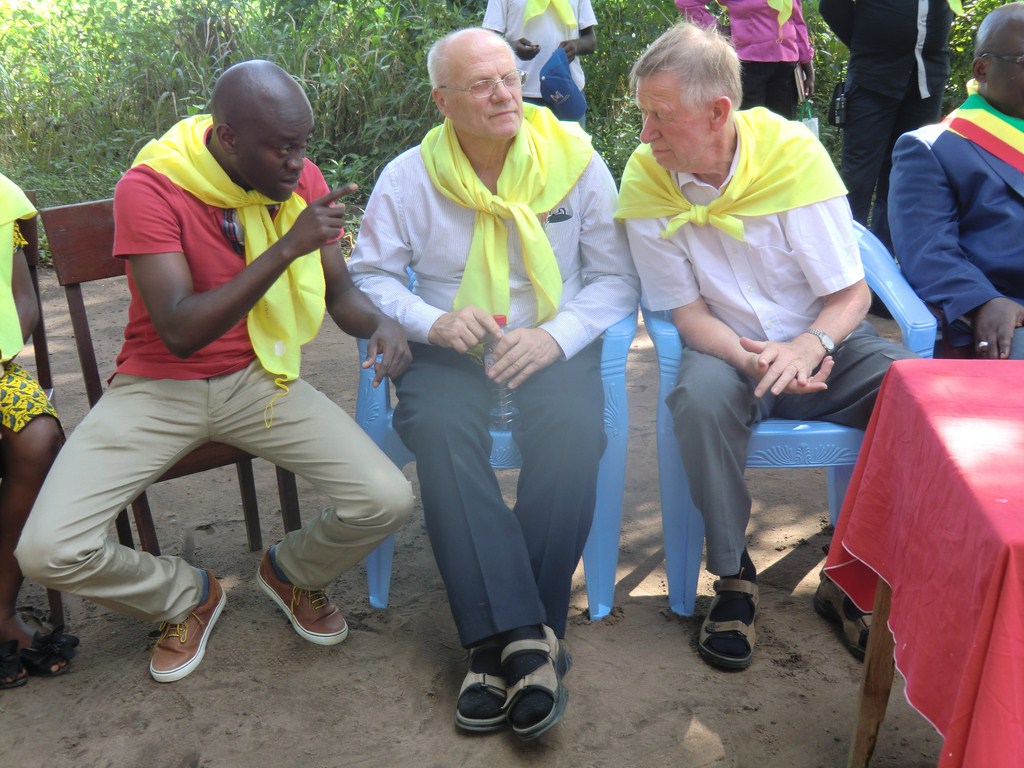 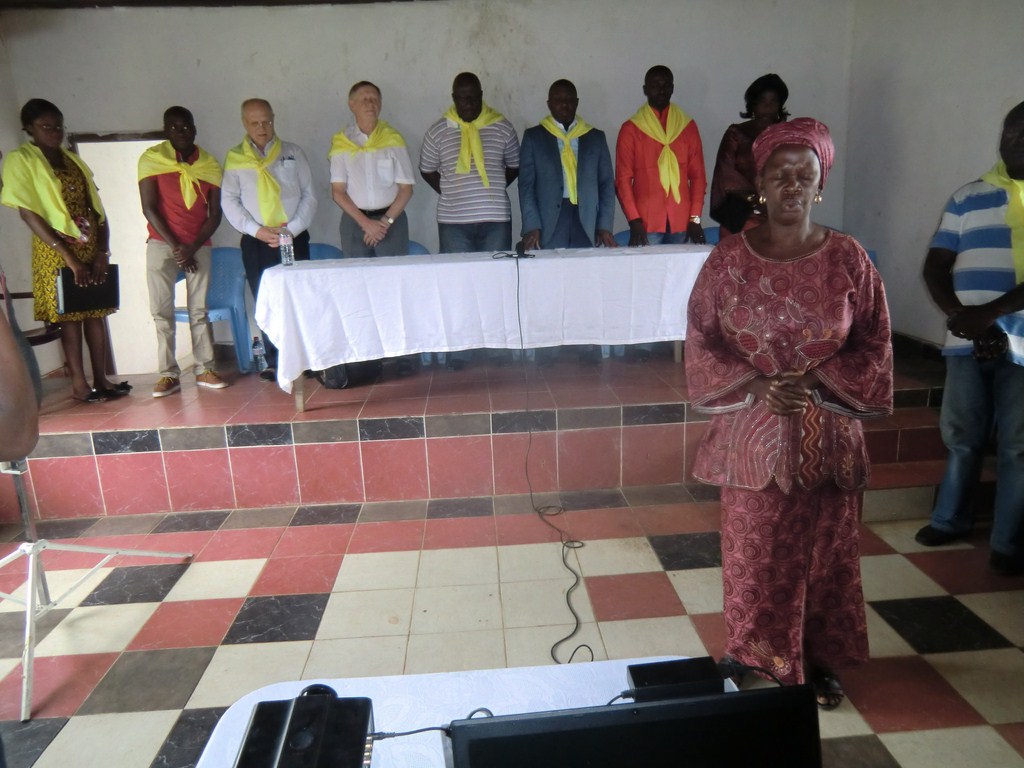 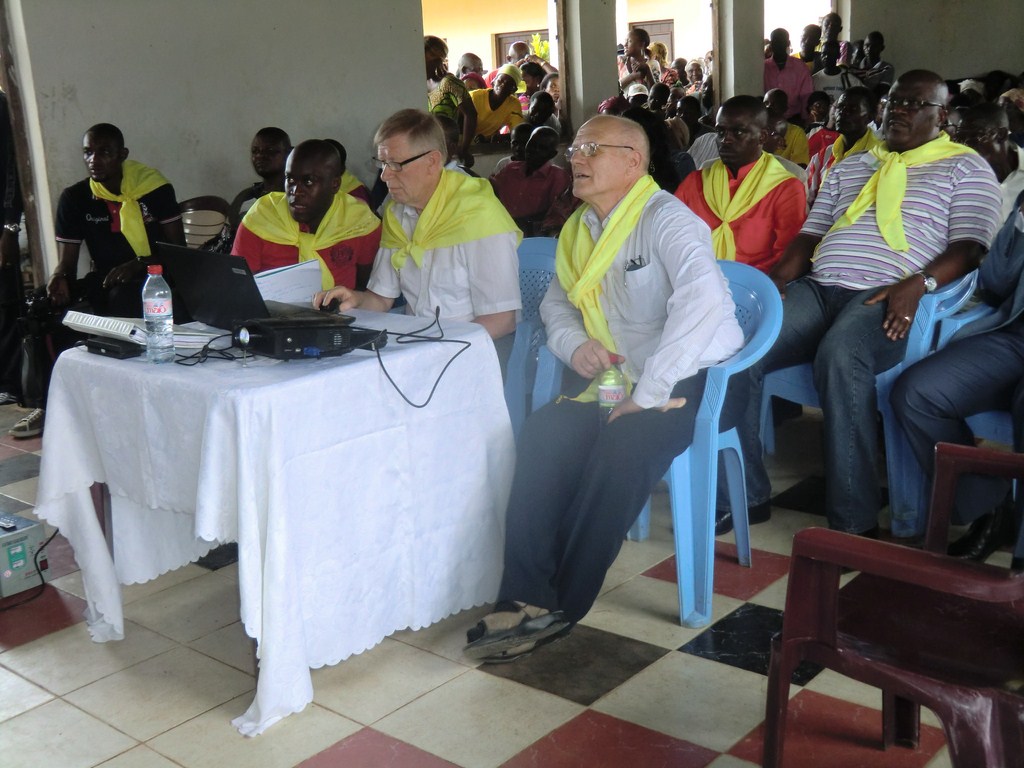 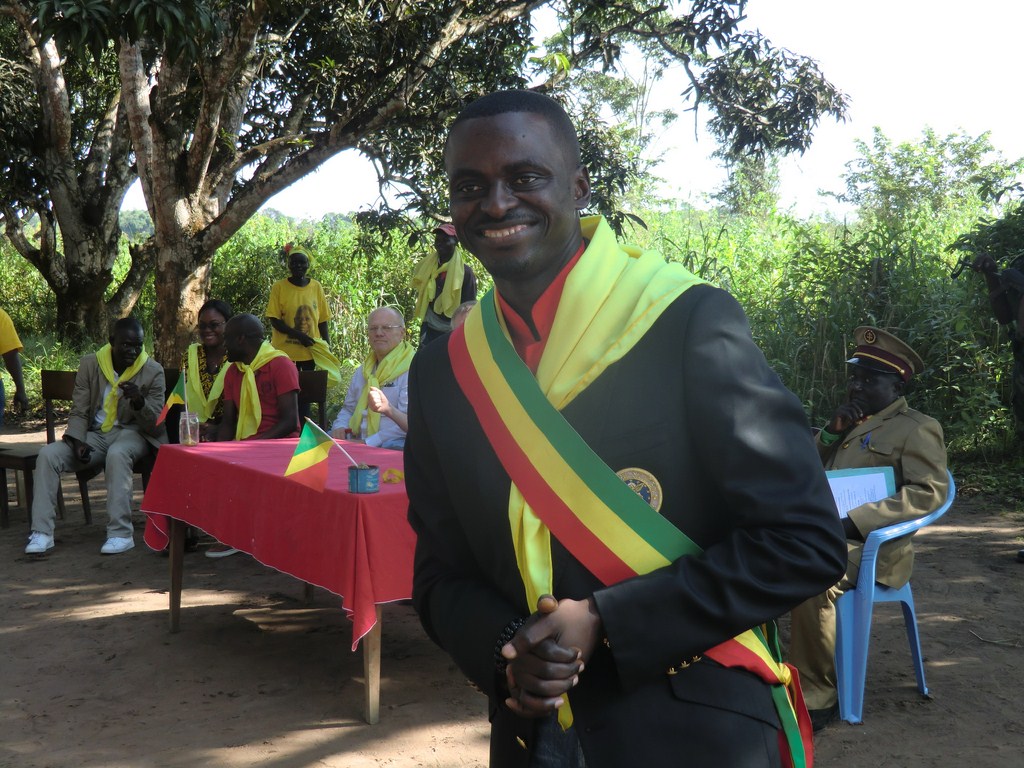 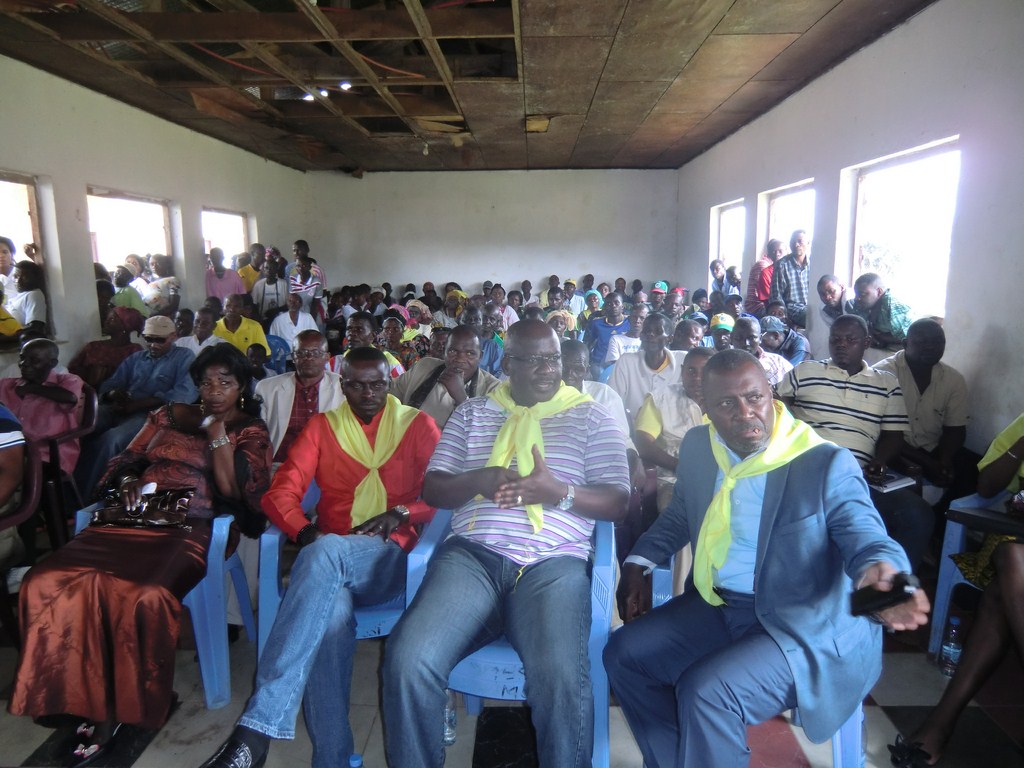 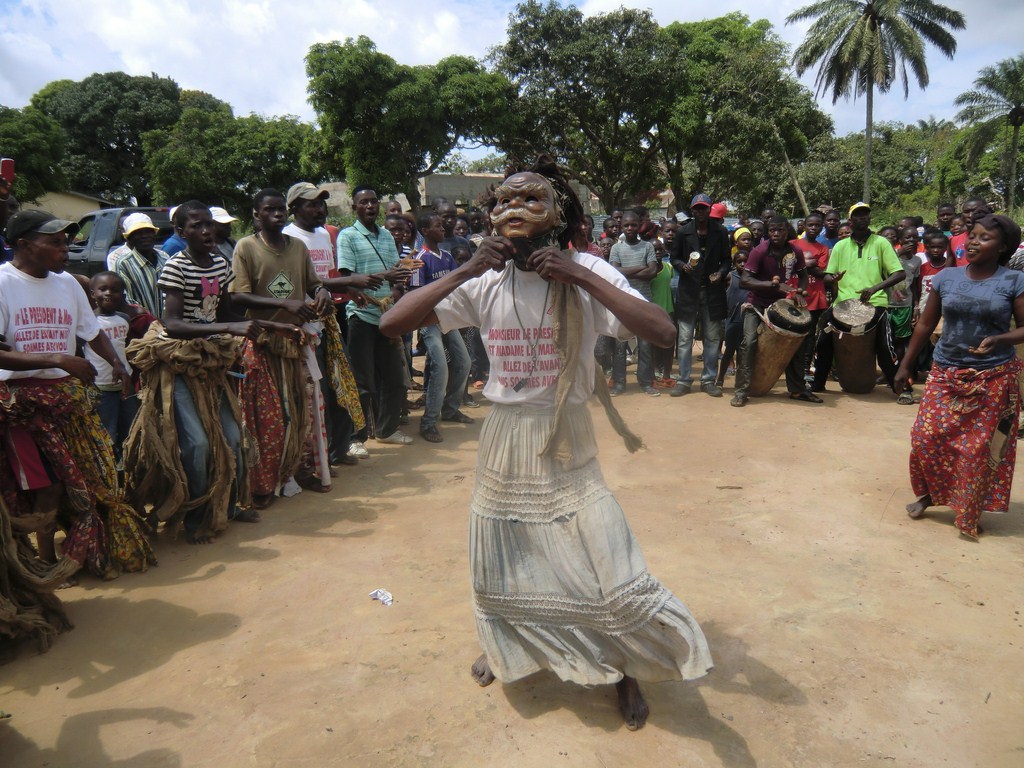 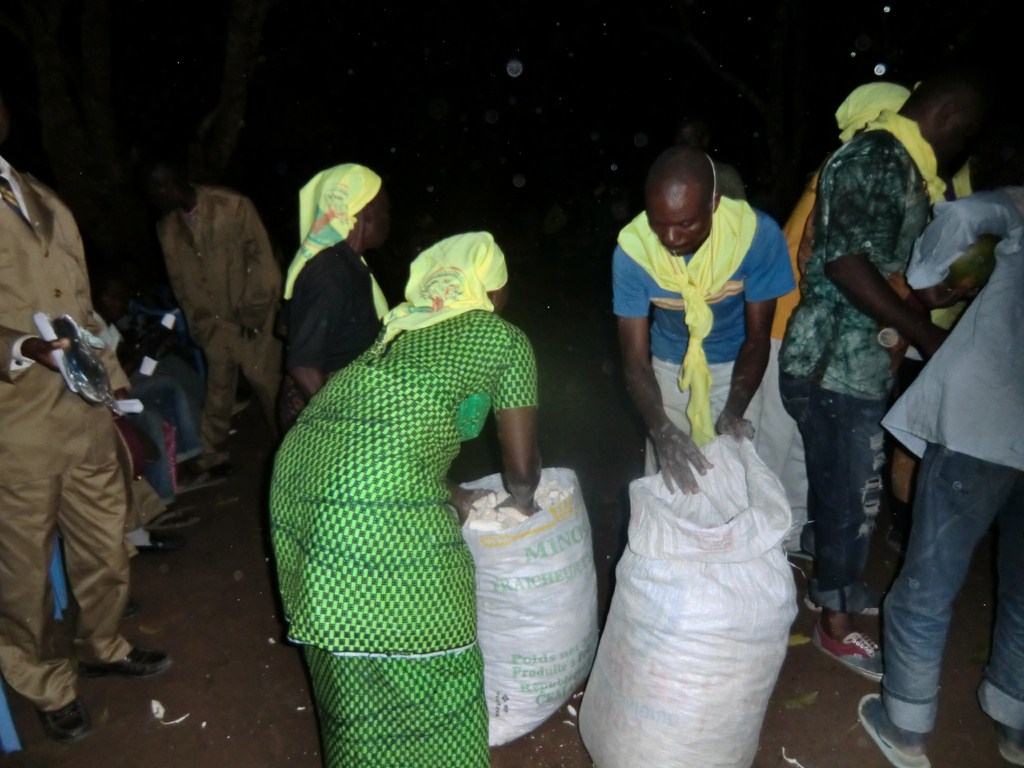 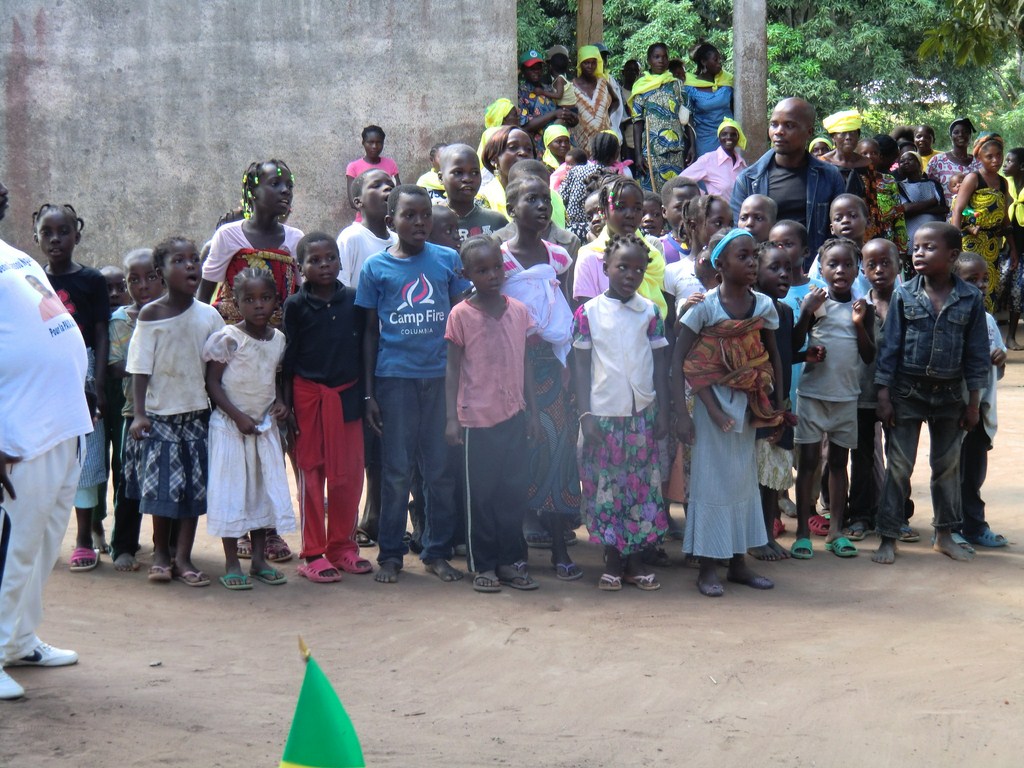 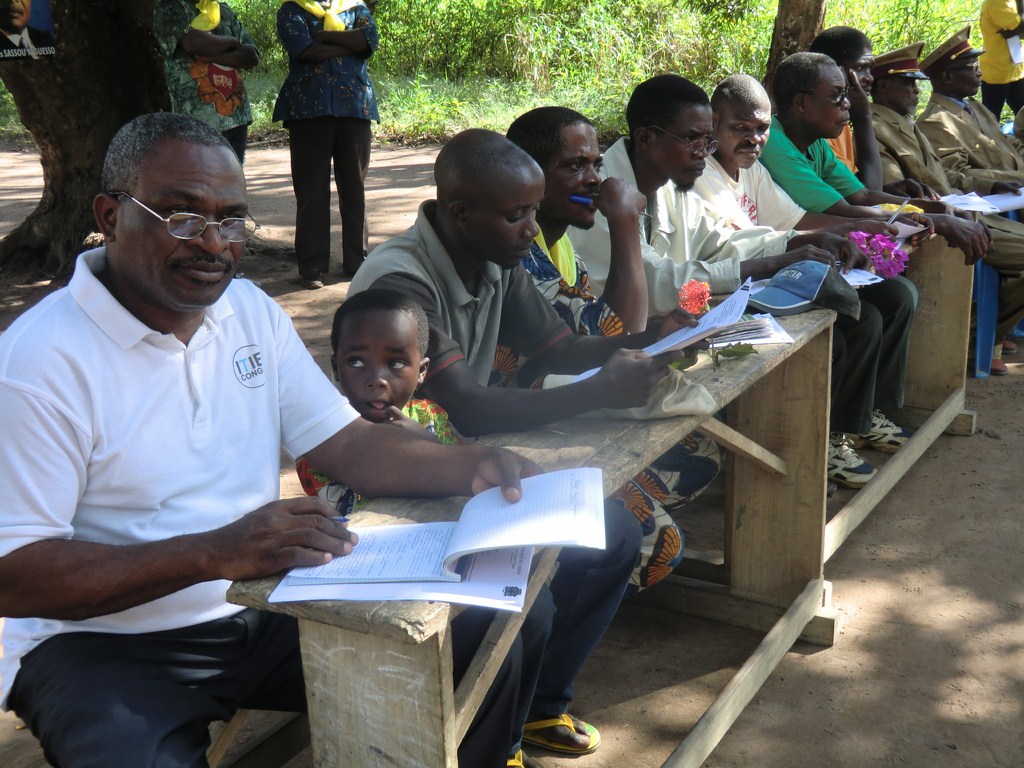 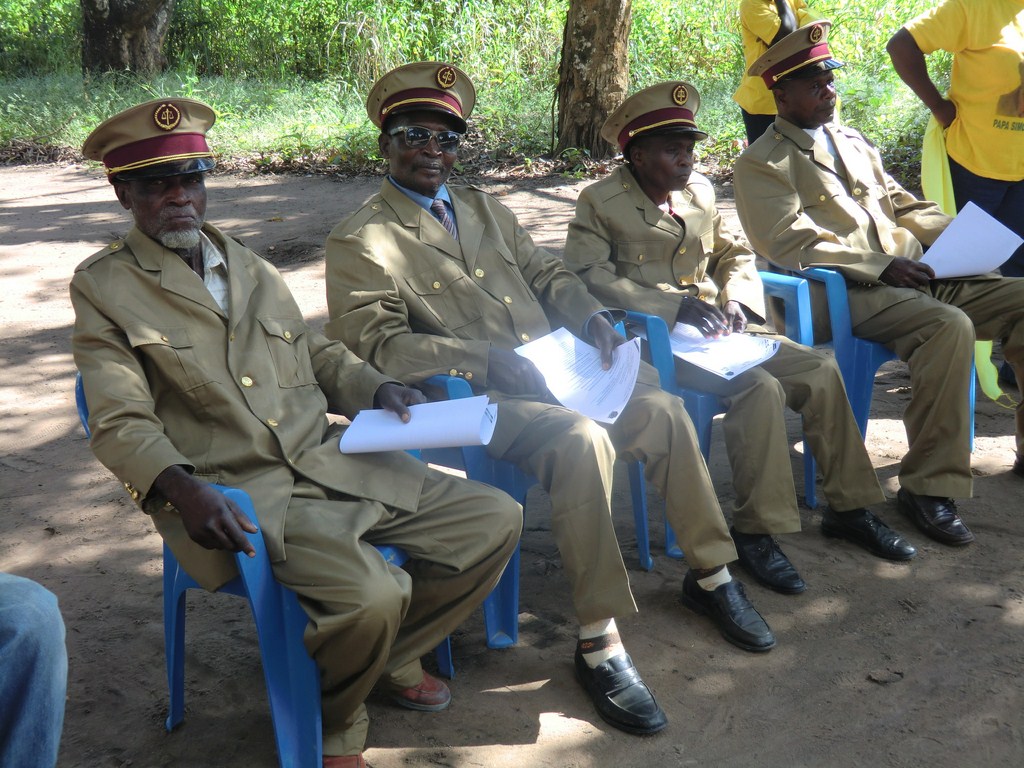