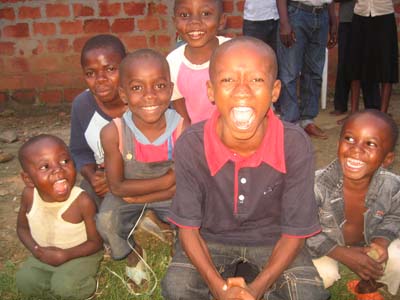 In 1954 Alice Sandblom, who has worked in Kongo for 17 years, was given the word ”mvibudulu” from the pastor of the Kiamvu Church. Now, she wants to pass it on to me. I will take it to heart and try to learn its true meaning, and I know that if I want to feel happy I have to carry it with me at all times. I want to be willing to learn. To practice and learn new things all the time makes life more exciting.

We have been forced to block the traveller´s check of 175 000 SEK that we brought to Congo on our last trip. We didn´t get any response from the BIAC bank in Matadi where we had left it. Yapeco went there several times to withdraw money for the entrepreneur loans, but he received the same answer every time: the money could not be withdrawn because the Matadi office has not received a confirmation from the head office in Kinshasa. Mr Kiwaka had promised us to cash the check, but his promise wasn´t worth anything. In agreement with Yapeco, we decided to block the check and transfer the money through Western Union, that we had used successfully on January 4th. That transaction took only four days.

When you block a check, it takes time before the money is available on your bank account again. Swedbank in Stockholm informed us that we will have to wait for one and a half week, before all parties concerned have been notified. As soon as we get our money back, we will go through with the transaction. Now we know that a normal bank transaction will work. We plan to pay out the loans in week 7.

On February 4th, it was Samuel Nkailu´s 75th birthday. When I called to congratulate him, he was busy translating our course material for entrepreneurs. He translates from French to Monokutuba. The Monokutuba language is a mixture of French, Kikongo and Lingala accordning to Samuel, and it is spoken in Matadi with surroundings. It makes me happy to hear that they appreciate our material and want to make it comprehendible to a larger group of people in Congo. Imagine entrepreneurship as a popular movement in Congo, what progress that would bring to the country.

The size of our entrepreneur project depends on our sponsors. They and you determine the dimensions. The other day, I heard on the news about the Swedish billions hidden away in Suisse banks to evade Swedish tax authorities. As far as I remember it amounted to thousands of billions. Now, the banks have to lift the veil of secrecy surrounding this money. Imagine the miracles one billion could bring about in Congo. But there are many brimful bank accounts in Swedish banks as well. Many Swedes don´t have a chance to make use of their money, apart from the sense of security it gives. Most of the money is passed on to the next generation. What if we could put some of these enormous resources to use, what an impetus that would give to Congolese enterprises. They would certainly get the help to start they need.