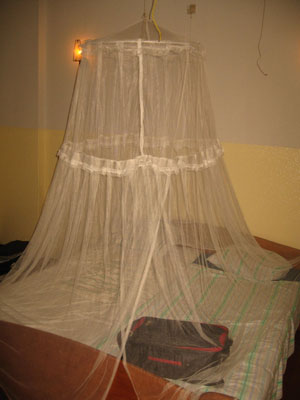 A few hours after midnight I noticed that someone tried to grab a hold of my duvet cover. It turned out to be Bernt, who in addition to his own, also wanted mine. After straightening things out, we went back to sleep. We share a room to cut out unnecessary expenditure. It is also a practical measure – our discussions can take place any time during the day. Thrift is at the bottom of many successes. One thing we haven´t made clear though, is whether one double room is less expensive than two single rooms. We haven´t asked the Nzo Binati Guest House management how they add up the bill. And Congo is the land of surprises.

At 7.30 am we had breakfast with Lendu from Luozi. One hour later, Matthieu came to get us, and we went together to his church, Bandalungwa. They have two services every Sunday, one in French and the other one in Lingala. We arrived in the middle of the French service. Matthieu introduced us and we told the congregation a little about our activities in Congo. We passed on greetings from Sweden, from the biting cold and the heavy falls of snow in the Nordic countries. We were present at the other service in its entirety. Student pastor Makanzu held the sermon. He talked about wealthy Sackeus who experienced an absence of meaning, but when he went to see Jesus he got a new purpose in life. Afterwards, we had a good conversation with him. And we are going to see him again when we return to Kinshasa. He speaks English. Another guy, Pico, who acted as our interpreter also speaks English. There was collection three times during the service, a surprising feature. We weren´t prepared for this, and for the last collection we had no money left. The first collection went to the choirs, the second to the congregation and the third to the poor of Kinshasa.

Our taxi driver, Fistom, had overslept and Matthieu had to hire another one. But when the service was over around 1 o´clock, Fistom was ready outside the church and order was restored. Then we went to the Prokin Orphanage and met Sebastian. He used to be a street child, and is now the manager of the home. At this moment, there are 38 street children living there. The home makes sure that they get an education, and a proper childhood and adolescence. At the age of 17 – 18, they leave the home. After that the big concern is to get them employment. An English missionary couple, living in London, founded the home, and Sebastian is their adoptive son. Most of the support to the home comes from Great Britain.

The electricity disappeared two hours ago and right now, it is hard to discern the characters on the keyboard. I am out on the terrace, and twilight is quickly setting in. The temperature is 31ºC and there is not a single snowflake in sight, wonderful. Now, Bernt came up with a solution to the lighting dilemma. He went to get one of the torches that have a generator, and I can see everything I need to see.

After lunch at 2 o´clock, we took a good long siesta, and woke up again around 3.30. Except Bernt and me, Lendo, Tutondele and a catholic nun are also staying at the Guest House. She was educated in Kiev, Ukraine. The caretaker is now trying to start the generator. We´ll see if he is successful. Boudda, our chauffeur from this autumn, is here to assist the caretaker. Oh my! They managed to get the generator going which brought about a deafening noise, but we certainly had electricity again.  My spot on the terrace is located only 15 meters from the generator, and I would be using earmuffs if I had access to any. A tiny lizard is hurrying across the ceiling above my head. She seems to be catching insects. As long as she doesn´t tumbles down on me, I am fine with that.