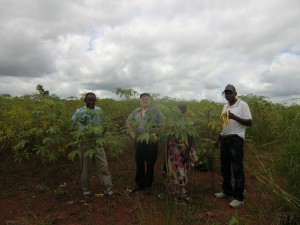 After breakfast we set out for Nsanda, to spend the day at our agricultural project. First, we ran some errands in town. To begin, we left our water containers at a water distributor. For a long time, there has been no water in the taps, and now, there was water left from the heavy downpour the other day. Hence, people could fetch water at different locations in town in containers.

We visited the immigration office and met with an officer, Thomas Tonongo. Yapeco had been asked to bring his white guests to the office. The official spent a good while talking to our host, he read the passports forwards and backwards, and when asked how much he understood (of the Swedish) the answer was that he looked at the pictures. By now, we have quite an amount of visas to a number of different countries and the visas are often beautiful artwork.

Opposite to the immigration office, two of our contractors, Dialendua and his wife, have their shop. It is called Mson Groupe Sports, and Dialendua and his wife are accomplished entrepreneurs who play their cards well. It was very nice to exchange a few words with him. Note that under his name on the sign above the shop, it says “God’s will”. Then we fueled up the car and filled up on hydraulic oil to manage the rough road out to Nsanda.

In Nsanda we met Clement, Juliennes man and Jima, their driver, and factotum, a guy who is worth his weight in gold. He had admitted to us that he has two wives, but he is very dutiful and knowledgeable and much appreciated by Julienne and Clement. We parked Yapecos car and went together the last 15 km to the fields in the old Toyota Land Crusier. We took a bogie wagon loaded with banana plants in tow. Inside the car, we were seven people. The banana field has to be supplemented with some new plants. Some banana plants have died because of weed – the two meter high elephant grass. You must exert yourself to keep up with the rapidity of the vegetation here.

On the way to the fields, we met a group of men who wanted to talk. They had cut down bushes and elephant grass on an area of ​​30 x 30 m. Clement told me that their friend Nzau from Kvakva, 85 years old, died a few days ago. Now, these men were preparing his gravesite. Nzau had owned the land. With the approval of the government, you are allowed to be buried on your own property. This is a way to consolidate the family’s ownership of the land.

Contrary to last time, it was a joy to see the plantations today. The ten hectares of cassava looked very nice. The five new acres of cassava, planted in december are taking up well. There are 300 banana trees on their way. The sesame shrubs are growing, as well as the pili pili and some other plants. Now, the challenge is to take good care of the harvest and make it profitable.

While we walked through the fields, Jima and another guy gathered firewood which they loaded onto the bogie wagon. When we got to the village, Jima dismanteled the injectors of the tractor and some other parts used for fuel supply, which we will let renovate in Sweden.