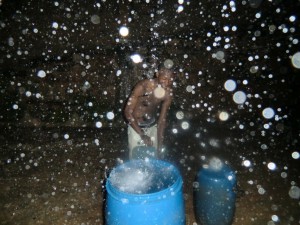 Stig collecting water in the rain

Today, it felt great to get up and feel healthy, there is much to be thankful for. Adele cooked a good oatmeal porridge for breakfast. I mixed a little dry milk with water as usual, to eat it the Swedish way. You must have milk with your porridge, don’t you? In Congo, they sometimes put the dry milk directly into the porridge. It was the first time I ate porridge with a teaspoon but it was probably good for my stomach, the intake was thus a bit slower and habituation to food came gradually.

Yapeco had bought bus tickets to Matadi the day before. We were thus going by public transport today. I went with Jbam in his car with all the bags to the bus stop. Bernt and Yapeco had to take a taxi. It took about half hours to get there. The bus we were traveling with were of Indian manufacture, not so great but powerfully built.

Boarding was a bit chaotic, but everyone who would like a ride came aboard and when we all were seated, the calm settled among the passengers. Baggage was marked up with the numbers on your ticket, at this point the bus company was very organized. An inspector of some kind suddenly showed up before we left. He was only interested Bernt and me and he asked for our tickets and passports. We were a bit annoyed at first. But it proved to be an actual police officer who wanted to check that our papers were in order. Our papers were fine, and to confirm that we got his stamp and signature on our bus tickets. We were lucky not to be undocumented. Probably works the police in the same way in the Congo and in Sweden. They go on appearance.

At 8 a.m. the bus departed and we arrived to Matadi at 3 p.m. We had traveled a distance of about 400 kilometers. It took more than two hours just to get out of Kinshasa, but then it went fast and we had a good driver. The bus stopped at a toll for the lavatory and at two markets for grocery shopping. When we reached the halfway point, the bus company offered Fanta or Coke, a bun and cheese. A bus host in overalls distributed the snacks. Distinguished service. The bus tour was pleasant except for the last part which was a little too warm.

This time, we will stay with Yapeco and Augustine and their children Stig and Signe, their six cats, a dog and several chickens in Matadi. Bernt and I have a good bedroom and in their living room, I have set up my office in a corner.

Dinner was served when we arrived at 16. After the meal we installed ourselves and rested for a while. Later that evening came also here a real congo rain with thunder. There was so much rain that the roof couldn’t manage – some of the water got inside. Bernt has his bed by the window, and he was getting a water bed. Here, as in many houses, there is no glass in the window holes. They are equipped with external grilles and interior shutters.

The municipal water supply is poor and hasn’t worked for a long time. Instead, rainwater is utilized. Stig went out in the rain and took care of as much as he could. So now we have the shower water for several days.

When the outer and inner precipitation had calmed down, and the lightning had expired, Yapeco gathered the entire house to evening prayer at the conclusion of the day. 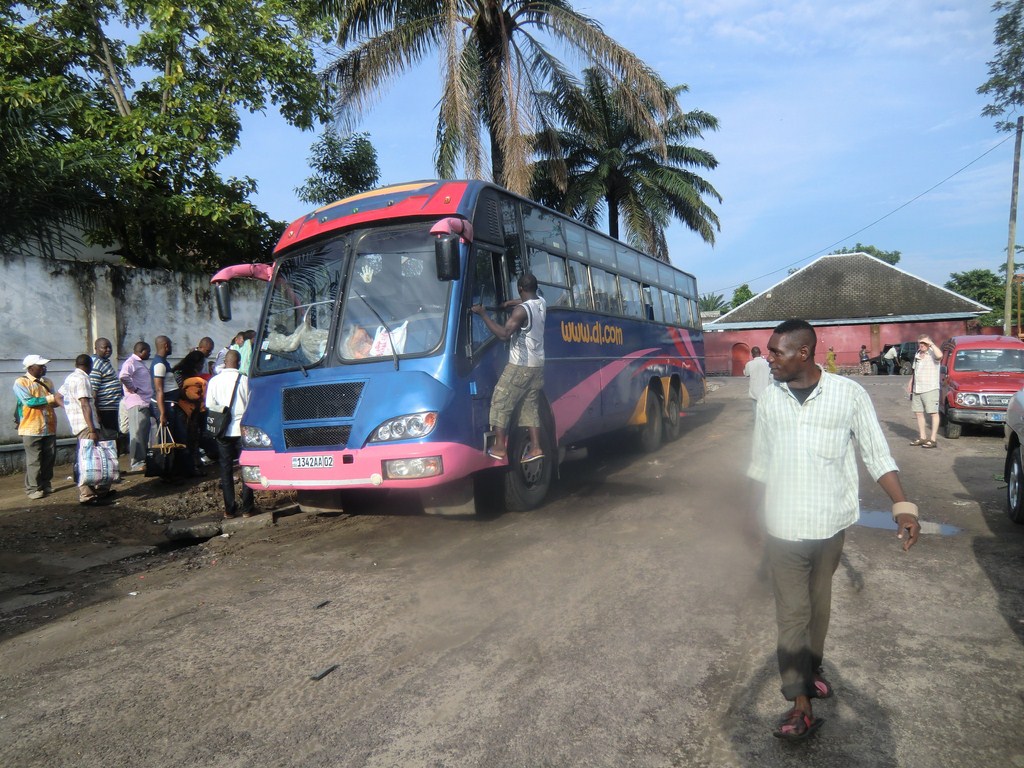 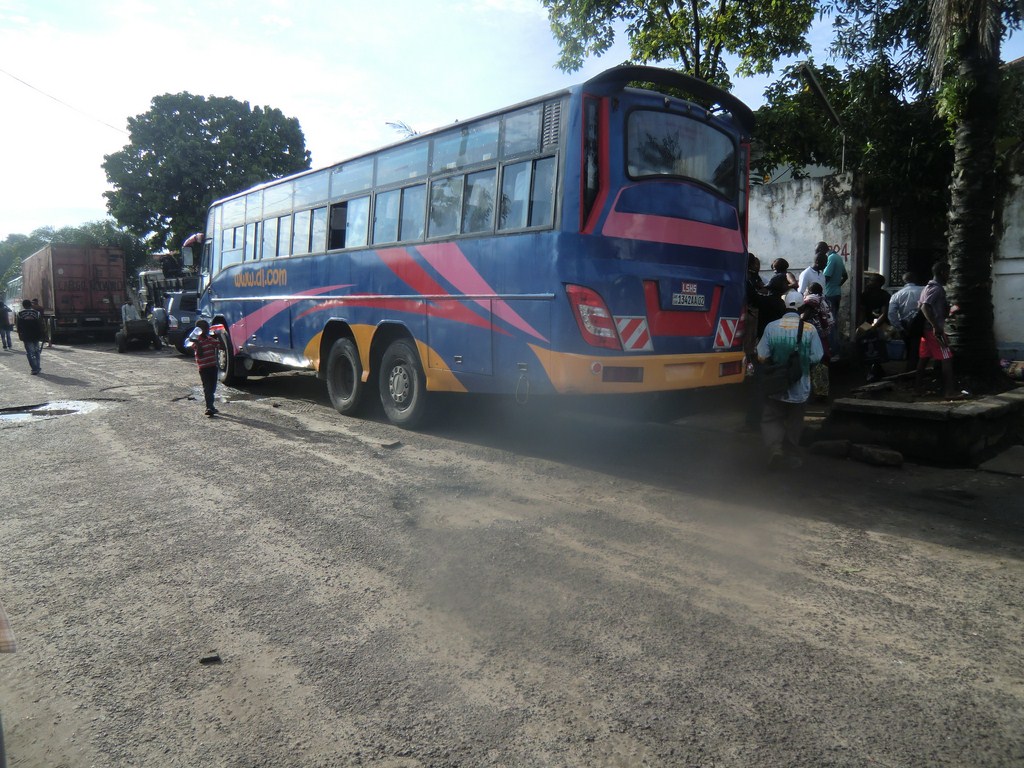 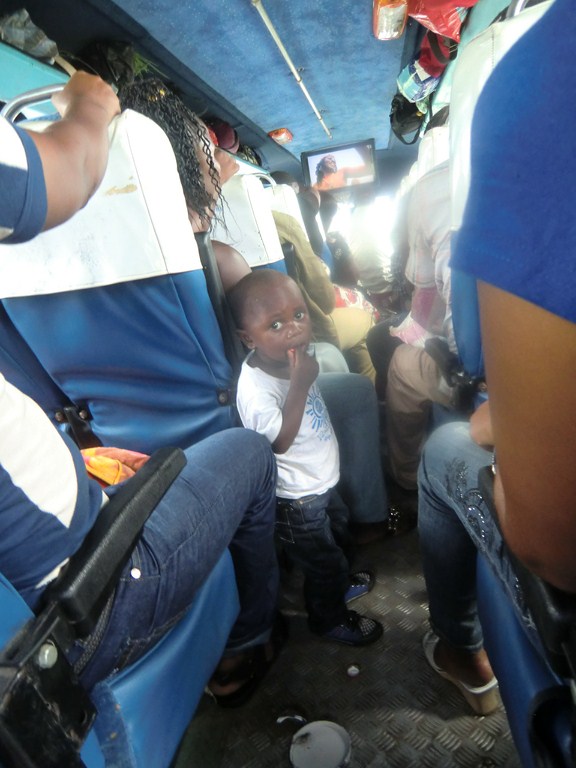 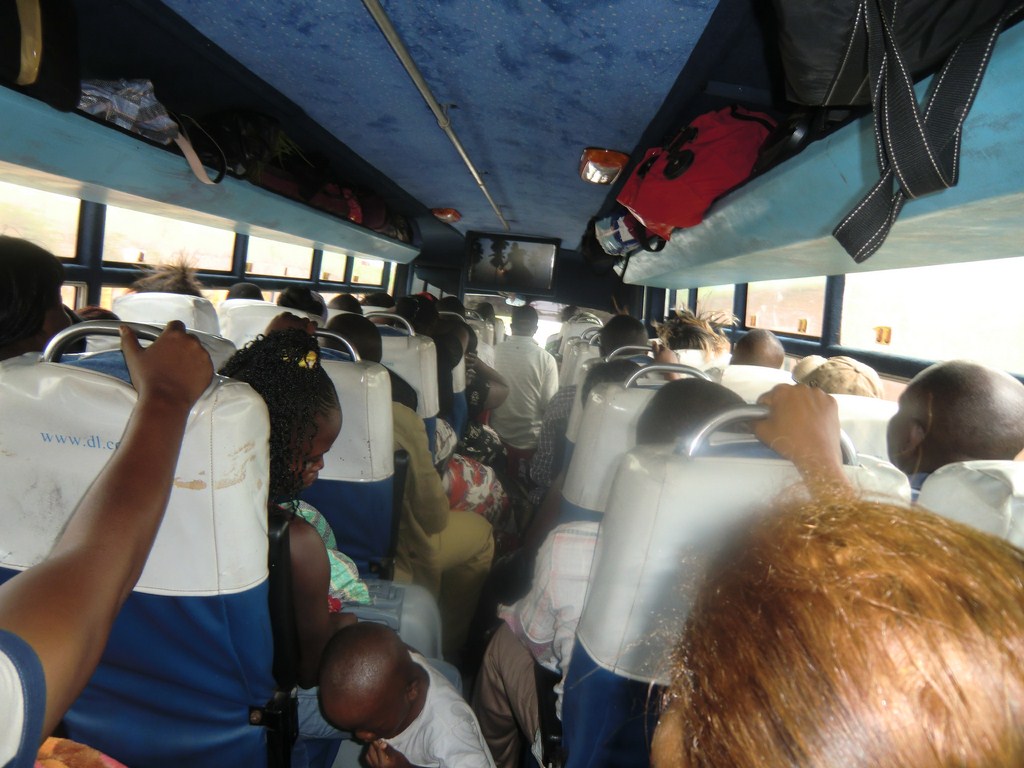 3 thoughts on “On the bus to Matadi”