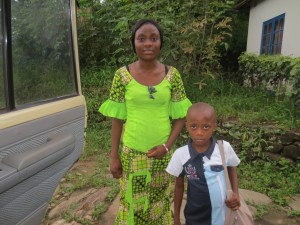 At 9:15 am, Julienne Kukangisa went with us down to the market to buy beans. She then took a taxi to Nsanda to welcome a new employee, Kasongo.

We will bring some peanuts, sesame seeds and a grapefruit to Sweden. All of it has grown on the Nsanda fields. Saturday when we were in Nsanda, Julienne and I peeled the peanuts with some assistance by Yngve.

We continued towards Kimpese, the driver Augustin, his uncle Clement Nyambudi, Yapeco, Yngve and me. We arrived at noon. Before we did anything else, we met with Nganga and then Tutondele. At Tutondele’s, we met a young man named Floden (river) after the Swedish missionary Flodén.

We came to Pilot villa, where Hélén had the dinner on the table. She surprised me with french fries, they were really good. We had passion fruit for dessert, also very good. Hélén asked us to mail two letters for her in Sweden. One of them is to Inga-Nora Jervgren and the second is to Anneli Andreasson. Yesterday I photographed the girl who is called Inga-Nora after the missionary, young Inga-Nora in Matadi.

We continued towards Kinshasa, and Clement bought a tasty fruit on the way. It’s called mamosta. We drove past numerous trucks loaded with charcoal. Along the way there are also colossal stacks of charcoal sacks, the only thing you can use in the city for heating food and water if you don’t have electricity. Wood smokes too much and causes a big problem: soot.

We were going at a steady speed and arrived in Kinshasa between 5 and 6 pm. At Nzo Binati we were well received, except that the power was missing. Augustin once again had a headache and will now try my ibumetin painkillers. Clement helped me translate that he should only take one at a time, and no more than three per day.

We have started to write this blog in the light of a flashlight, but we don’t know yet if we will be able to finish it.

Tuesday, our last day in Congo, we have scheduled a meeting with a professor to discuss the type of energy efficient house that Yngve has been working on, and which already a year ago was presented to the professor.

Moreover, we will have conclusion meetings with Nsimba Anderson and Yapeco. We will make a summary of the time in Congo Kinshasa. We hope to be able to check in tonight or tomorrow online. Our luggage we will leave at the Air Brussels office in Kinshasa.

4 thoughts on “On the way home”