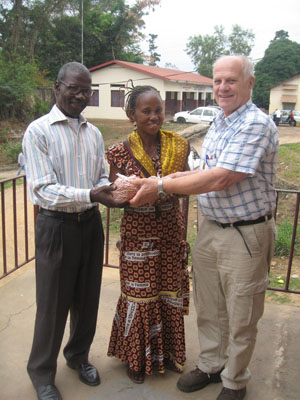 Early in the morning, Muditu and his wife Josefin came over and gave Bernt and me one kilo of peanuts each as a surprise. They´d got a good harvest in January of more than 1,500 kg. We haven´t contributed to this harvest. Before we came into the picture he cultivated 1.5 hectares. With the help fm MSG he has expanded to 4.25 hectares, and our loan made it possible for him to sell his produce at the right time. He has been storing all the nuts in his house and will sell them when the price is good. Josefin was on her way out to the fields to take care of the farm workers they´ve hired. She is the farmer of the family and she is the one who looks after the fields. Obviously, it´s the women who carries the heaviest burden in the Congo.

After breakfast, we drove out to Nsanda. First we visited the town hall. We needed to see the municipal manager and inform him about the agricultural project we are starting up. When we got there, he was on an official journey on his motorcycle. Another civil servant called him to tell him we were there, and an hour later he showed up. The petrol had run dry on him, and he´d had to walk the last part of the way. We had a nice talk with the municipal manager, Mbenza Mvumbi. He welcomed the Nsanda Group with open arms. We also told him about the activities of MSG. At once, he asked MSG to come to Nsanda to train entrepreneurs. He told us that he himself owns a lot of land, and that there are minerals and gold in the ground. Certainly, there are hidden fortunes all over the Congo. We must assist the Congolese to discover first the possibilities within themselves and then the opportunities the natural resources of this rich land can give them.

The Nsanda Group farmlands are outside the village Kwakwa. We had some difficulties finding our way there. After several detours between the houses, and after consulting the villagers we finally were on track. The Nyambudis themselves hadn´t been there for many years. The vegetation was three meters high along the road – or more correctly worded: along the cattle track. At times, Yapeco had to plow his way forward with the car. Fortunately for us, we came in the dry season. If we had come during the rainy season, we would have had to walk, cutting our way through the vegetation with machetes. We took a short walk into the fields, to see if we could find any boundary markers. But no, they had to go undetected a little while longer.

The farmlands seem to be located in an amazing area. Large parts of them are on a high plateau, next to a valley with a watercourse. We talked about how to use the vegetation that grows on the fields now. It should be possible to hack it to pieces and plow it into the ground. The nutrients ought to be brought back to the soil. If you read this, and have ideas of how this could be done, please contact us! We don´t think that burning the vegetation is good for the earth. A few manioc plants were left from earlier cultivations. Clement picked up a root that Julienne peeled and shared with the rest of us. The first harvest of the Nsanda Group was thus officially reaped and consumed. The root tasted sweetly of nuts.

We had a look at the tractor BM Volvo and the Toyota Jeep. Tuto, the son of the Nyambudis, is in charge of getting the vehicles in shape. Tuto got hold of a better engine for the Jeep in Kinshasa. And all necessary parts for the tractor have been procured. Next month, the clearance of the fields will start. It is indeed an exciting project!