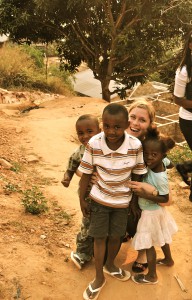 At the fridayevening the electricity disappeared and therefore it forced us to end the lesson one hour early again. Unfortunally it was the same class as the last time, luckily it is a class that has pretty many pupils that already can speak a little English. At the morningclasses it is more children that attend. On one hand it makes everything a little bit more complicated because it is a big gap between the levels but on the other hand it becomes a bit easier because the children are always happy and appreciate and enjoy every exercise. Especially the songs and the games and as goes for me that is what I like best too! We have now reached the material of lesson three and it contains the bodyparts and the family and that includes songs as “give me that old time religion”, “head, schoulder, knees and toes” and “father Abraham”.

When me and Yapeco went home from the morninglesson this Friday I met some female footballplayers that were going home from a training or a game. It was nice too see that there isn´t only men and boys that are playing. Ofcourse I would like to join them for a game or two some day! Here and there I see children play football. They play with halfdecent footballs, barefoot and with rocks as goalposts but you can´t mistake the joy and their technics are really good too!

At Saturday I woke up with a cold. I really hoped that I would be better as soon as possible. I really don´t want to come down and become sick the first thing I do. Lucky me I have the day off on Saturdays and I had plenty of time for recreation. Because of another power outage the porridge was cooked outside on a fire. After the breakfast I helped the ladies making saka saka. It´s a plant that they plant here in their garden. First you pick it, then pile it, then cook it and at last you mash it. It is much work to make the food compared to how things works at home but the result is delicious!

Luckily my cold turned better on Sunday and that also made it possible for me to sing a song in the church. This time I performed ”Kumbaya my lord” and I also played at the church little synth.