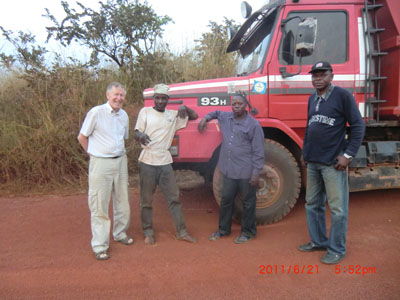 The water level of the Congo river is low at the moment, and the ferry staff have to build temporary ramps and temporary roads on the sandbars for the cars to get on the ferry. Today, this has caused many delays. Last evening, we were notified that a truck had got stuck in the sand. It had blocked up the boarding zone, and no vehicles could drive onto the ferry. The truck was carrying 10 metric tons of manioc, and all of it had to be unloaded manually by the riverside. The ferry-service was working again the next morning, and we sent our ambulance jeep on ahead to queue up. At noon, Gunnel drove us to the ferry stop. Our car had been ferried across the river, but the ferry itself had stayed on the other side because of a car that was stuck in the sand on that side. Three hours later, we could go on board and in Kimbemba, Samy was waiting for us. I used the waiting time to take a nap.

When we had got into the jeep, the boys to whom we had given bibles in English came up to the car. They called out our names, ”Bernt” and ”Yngve”, and we were pleasantly surprised to see them. How could they know that we would be in Kimbemba today? We weren’t informed of how, but we guessed they had heard it through the grapevine. They had brought a basket full of papaya and oranges for us. Now we learned their names; Grevis, Muris, Beni and the English teacher Alain. We exchanged a few words, and they expressed that they would like to see us again, next time we come to Congo.

Samy doesn’t hold his fire, he firmly steps on the gas but he is a skilled chauffeur and drives safely. The whole capacity of the Toyota Land Cruiser is certainly put to use. Bernt and I wonder at how it keeps together considering the tough guy driving it and a road that is everything but a road. The car is built for hard circumstances, the engine a six-cylinder diesel. Halfway to Kimpese, we met CEC:s Scania truck. The driver had stopped by the side of the road because of a noise in the engine. He didn’t want to push it any further and had left for Kimpese to get repair help. We talked to his passenger, the person in charge of transports within CEC, who had remained with the vehicle to safeguard it. He was sitting at the roadside making coffee and cooking. We have met him a few times before, and he was pleased when we stopped. A few meters from the roadside, he had made a sleeping place of elephant grass and a few clothes. Yapeco and I tried out the resting place and it was pretty good. I am sure he has to spend quite a few nights by his vehicle. Bernt told him that we have raised money in Sweden for a new engine, and he received this message with gratitude. Stops like these are commonplace along the roads of Congo.

There are just a few small villages along the road between Luozi and Kimpese, but there is also a larger village called Kiasungua. When we got there, there was a brisk trade at the marketplace, a lot of different fruits being marketed. We bought some bananas and Yapeco bought manioc wrapped in palm leaves. Even the animals were on the move; pigs, goats, geese and hens both with and without chickens were crisscrossing the road. One hen couldn´t make up her mind which way to go, and that cost her her life. At least one family will have hen for dinner tonight.

At 7 pm we arrived at the guest house in Kimpese. By then, we had covered 242 bumpy kilometers in the jeep, whereof half the distance today. We had come unscathed and were served a tasty dinner. For desert we had the papaya we got from the boys in Kimbemba. After the meal, it was time for a shower. We were rather red from all the dust. Fortunately, there was both electricity and water in the tap in Kimpese.