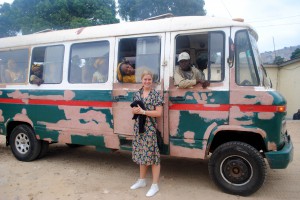 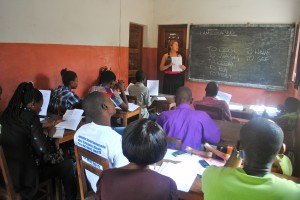 I have discovered that I´ve forgotten to mention my lesson number four. To make it short so did I teach them the colours and animals. This lesson also included a song or two and one of them was the Swedish song written by Astrid Lindgren ”lilla katt” translated to English. But as I’ve told in the last blog I have now reached lesson five that is about questions, some grammar and verbs. In my opinion is it more fun to teach and it also feels mighty important. As exercises I use ”fill in the gaps” and draw a line between the English word and the French. But I have a mayor problem with the teaching and it is the powerbreaks. In the day it isn´t troubling us because the sunlight is enough but in the evening after six o´clock it is to dark to read or write. Unfortunally there are as many nights without light as with so therefore the lessons become only one hour long instead if two. And the problem gets even bigger if, as yesterday, the whole class except one pupil arrives almost an half-hour late. With only a half-hour too go it´s way to short to teach all the things I want to teach, especially for them who from the beginning knew no English at all.
The other day I were an hour early for my lesson and no pupils had arrived yet but what had arrived were about twenty other kids that were more than delighted that I were on my one and they all wanted to introduce themselves and talk a little with me. Because I´m not exactly a star in speaking French and I couldn´t find anything better to do I found it to be a perfect moment a kickabout. Therefore I played some football with them to their big delight and to my delight the ball was decorated with a Swedish flag. A contribution from Matadi support group maybe?