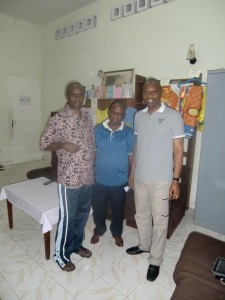 The Presidents Diafuanakana in CEC , N´souami in EEC and pastor Kaya

We had good company for breakfast at Nzo Binati. With us were the Mission Directors Edi Diafuanakana and Patrice N’Souami from Brazzaville, his secretary Reverend Thomas Claude Kaya, Dikens, our former bus driver, Lema, a former participant of our course in Luozi and a lady named Catherine. She is a former political refugee from Brazzaville, now living in Sweden. After her visit to her homeland she was heading back to Sweden and Vårgårda.

After breakfast, our driver Pascal picked us up in his Mercedes and took us to the office of Air Brussels in Kinshasa center, where we would check in our luggage. It took a while, but we were in no hurry. The night before, we had agreed with Luthelo Muller that he would come and get us at Air Brussel. A women with entrepreneurial skills had made a large box of sandwiches that she sold to hungry travellers at the office, and another one was selling soft drinks. We did businesses with both of them, thus we had secured our dinner while we were waiting.

Gösta Luboyi met us at the Air Brussel office. We had some matters concerning the lamp business to discuss, and we talked about Focus Business School in Kinshasa. He also helped us with the interpretation. Last night he had come back from Sweden after having been to in Karlstad and Stockholm, to visit the National Agency for Safety and Preparedness (MSB). He worked for MSB in Haiti during 3.5 years and he was the last aid worker from MSB to leave Haiti. His task in Sweden was to report on his work there.

At one o’clock Luthelo Muller came to pick us up. He had arranged a meeting with the Minister of Land, Property Registration and Land Surveying, Professor Mbevinga Bila Robert. We had a nice meeting where we introduced MSG as an organization working with entrepreneurship training and which plans to import innovations. We introduced the ECO-house and we suggested that a demo could be built in Kinshasa or Matadi.

We told him that the funding must be Congolese, and that we must have a Congolese partner who has a strong interest in such a project. He suggested that we put the shovel in the ground in June. We’ll see how it goes. He spoke enthusiastically about forests that must be saved and that the ECO-house fits right into that context. A house that is made energy self-sufficient by solar cells and a biogas plant does not burden the environment. Old-proven innovations can be combined with good results.

We spent the last few hours on Nzo Binati doing paper work before we went out to N’djili Airport. At 8.35 p.m. we left Congo to pass the night over Africa and southern Europe.