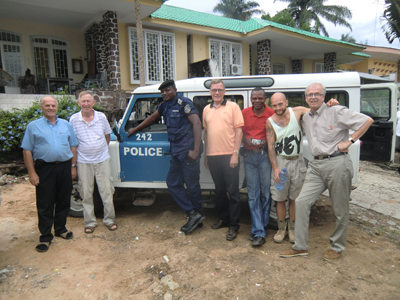 The driver José with his happy travellers

At 5:30 a.m. Therese had breakfast ready for us. It consisted one of the best porridges ever, bananas, tomatoes, tea and bread. At 6 a.m. we said goodbye and left with 220 kilometers ahead of us to Kinshasa. The road between Kimpese and Kin, short for Kinshasa, is 6 meters wide and paved. It is one of Congo’s most important roads. Virtually everything imported will travel on this road. Vast amounts of trucks pass here every day. Many trucks are new and modern, but there is also vehicles on four wheels with less reliability, which are repaired along the way whenever they refuse to move on. The trucks carry all the necessities to the 12-million capital Kin, and sitting on the top of many truckloads, as the icing of the cake, there are people traveling to the big city to do business and try their luck. Usually, there are also animals in the load. On the tarpaulin on top of one truck’s load there was a goat tethered with a rope. It seemed to feel fine fine, and it had a good overview of the fellow commuters. There were other goats who were less lucky. We saw four who were tied together on the rack of a motorcycle. Bernt said that the reason must be traffic safety. So be it, but I don´t think anybody would like to be tied like that.

On the trip to Kin, we passed a number of towns and cities: Banzagungu, an administrative center with law enforcement agencies, Inkisi where Mr. and Mrs. Mangikulua live, he – Damas – is a pastor and an entrepreneur, she – Aline – is also an entrepreneur. Both are engaged in MSG’s activities. Kikonka, a large marketplace. In Congo, the vast bulk of food is distributed through the markets. Pont Ngufo. Madimba, where Daniel Bimpe, a blacksmith from Luozi built a factory to process manioc, which can be refined into a variety of products. Kasanjulu, also a large marketplace. Eventually we passed Luila before we reached the big city. Kin is really large-scale in terms of both population and area.

At 10.30 a.m. we arrived at Nzo Binati, where we met Christopher and Tutondele. Christopher has been in Luozi for four weeks and taught judo to three groups totaling 62 students and three teachers. All groups practiced four times a week. Christopher was interviewed on the local radio about his activities and he had become friends with the church superintendent Edi Diafuanakana, who often came to watch the training. Edi gave his blessing to the enterprise.

We checked in our luggage at the Air Brussels Office in town. Yapeco bought us a takeaway dinner, we went back to Nzo Binati and had our dinner there. Then we drew up a contract between Tutondele, Yapeco and MSG. The agreement regulates how we will work with the import of solar lights. For example we went through what collateral the Congolese and the members of MSG will put up. When that was done as well as some other paperwork, José came with the police car, picked us up and took us to the airport Ndjili. It’s an asset to have this acquaintance, a skilled driver who makes his way in the most impossible of traffic situations. It took us one hour to travel the three kilometers to the airport.

At 8:45 p.m. the plane took off. This time it went directly to Brussels, a flight time of 7 hours and 40 minutes. It was a very pleasant trip. When we got over the clouds the moon shone full strength. At 10:30 p.m. we had the second dinner of the day. Then it was time to sleep, but that was a difficult task.