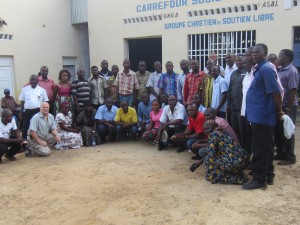 This is a report from the FBS Committee by Yapeco
We are in the velocity century; that’s right, because it feels like it was yesterday that we began our Focus Business course with Julienne as a lecturer . But today is Saturday and it’s been closing . But it’s just now that we have completed . Everything has gone well, thanks to God’s grace.

I began by greeting all participants and encouraged them to remain alert during the course, so that we as a participant in this course forms the core of the FBS. We will therefore direct teachers in our different contexts, to begin with in our homes , workplaces , churches, and so on.

The start was a little modest , because there were only 17 people and we had no projector. The lecturer had only two lessons. The following day, we were 15 people – no projector. Participants came too late. At the end of the collection , I tried to emphasize the importance of arriving on time . The third day on May 7, 2014 , I opened my collection at 15:00 and then we had the projector from the beginning. Everything went well and we had 5 lessons, but participants were not tired – instead it was the speaker who became tired. She had talked a long time and we were a total of 22 people. We continued so until the conclusion today , Saturday, May 10, 2014.

In total there were 32 participants and we handed over 30 certificates to those present ; two were absent , but we have left their certificates . The certificates were on hard paper, with signatures and stamps . One example is in the attachment. Of the 32 received 11 grade commendable and the other passed. We had coffee ; bread with meat , Coca Cola, Fanta and other soft drinks . It was nice and we finished off with coffee break at 18:50 .
We showed some images from Sweden , including from Yngve’s 70th birthday at his home in Sweden.

On the economy , I shall report on Monday, but I ‘m not sure how much we can use to encouragement or compensation. Julienne wonder how much she gets. Please answer , I can only act according to your requests. Thanks for understanding!