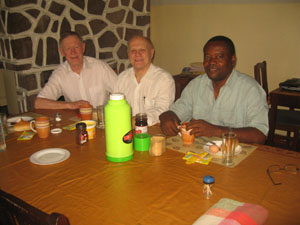 My journey to Congo started on Friday night. Bernt came to pick me up in Töve and I stayed the night at his house. In Bernt´s neighbourhood we got engaged in clearing away the snow. Snow had fallen down from the roofs, and we shoveled three garage driveways that Bernt – as a good neighbor – has taken responsibility for. When the driveways were cleared from snow we comforted ourselves by the thought that from now on, there wouldn´t be any snow for at least two weeks on our part. At home, in Töve, my good neighbor Kjell-Åke takes care of the clearing of snow with his big tractor. I had brought some photos of him and the tractor to show the Congolese how fortunate they are, not having to deal with snow. David had also given me photos of how Sweden looks when it ”rains” in winter. The ”rain” doesn´t flow off, but has to be hoarded up in giant chalk-white heaps and it can paralyze all activities in a developed country: trains, airplanes, big boats, cars and people can get held up by the snow, snowed in and get nowhere. This white ”rain” can also crush large, seemingly stable houses. We will try to explain for the Congolese that the word ”insnöad” (getting snowed in) have two different significations in Swedish. It can mean the physical experience of being held up by the snow, but it can also mean being stuck in prejudices and inflexible thinking patterns.

Saturday, Hugo arrived at 4.30 a.m. and had a cup of coffee with us before we took off for Landvetter Airport in Hugo´s Saab. We had bought the tickets on internet and only had to show our passports at the checking-in, and we were all set to go. We had brought just about the allowed maximum weight of luggage. On the plane to Brussels there were only about 20 travelers, but from Brussels to Kinshasa the plane was almost full, carrying about 300 passengers, mostly white people. The temperature rose with the latitude: in Brussels the temperature had been +5, in Douala, where we had a stopover it was +25 and in Kinshasa, where we landed exactly 8.30 p.m. it was +27, a pleasant temperature. The air trip had been very agreeable. Air Brussels’ service is excellent, we were very happy with all of the 7,500 kilometers that we had spent eating, sleeping and reading. I read a book that Bernt had lent me. It is called The Caravan of Crisis and is about depressed areas of the world and how people have tried to help out, not always to the benefit of the needy. We need to stop and reflect before making our contribution. The only thing about the trip that was not to our satisfaction was the price. We had tried to bargain, and we had good arguments too, but we didn´t succeed. We paid SEK 11 636 a head for return tickets.

Matthieu met us at the N´djili Airport. His good friend, the chief of police at the airport showed us into a VIP room with air-conditioning, where we waited for our luggage. We gave the staff our luggage receipts but anyhow, Bernt had to assist them in identifying our suitcases, and eventually we had all our things and were ready to go. Matthieu had hired a guy called Fistom from Kimpese to drive us. He has a small Toyota, and he will take us around Kinshasa and to Kimpese where Yapeco will meet us on Tuesday and take us further on to Matadi. Fistom drives his Toyota like most Congolese, he hoots and steps on the gas, and sometimes there are only millimeters between the cars. It seems that every driver makes up his owns rules of the road. And there are holes in the road all along. A few times, Fistom had to make a real effort to get over and past the holes. In spite of his maneuvers, the frame of the car got some severe blows.

We arrived at Nzo Binati Guest House at 11.30 p.m., where we left our things in our room and had chicken with rice, carrots and peas in the dining room. Afterwards, in the double bed in our air-conditioned room we came to the conclusion that we had not been sleeping next to each other since summer camp in Smögen some 55 years ago. The years pile up when you have been around for a while. When we had pulled down the mosquito net we fell asleep at once.

2 thoughts on “Second trip to Congo”